This material was used during the tour of historic Schrock sites at the Illinois Mennonite Heritage Center’s “Schrock Immigrant Day” on June 19, 2010.

(The following is for personal use only and not to be used in published form without permission.)

No. 1 – Metamora site of Engel home/barn where first Amish and AC meetings were held

The Engel log barn is traditionally thought to have been the site of the first Amish church meetings as well as the first Apostolic Christian services in Illinois. The barn was built by John and Peter Engel soon after they arrived from France in 1830/31. Their father was Christian Engel, the well-known Amish Mennonite bishop. Eight generations of Engel families have lived on the farm over the last nearly 180 years. The historic engraving of the barn by Jacob Faber shows a cart without wheels. When asked about this, Faber said, “wheels were expensive and rare in those days, and carts and wheels were interchangeable. No doubt some neighbor was using them when the picture was drawn. Faber’s son, Art, tells the story that Indians living in a thickly wooded area at the back of Peter Engel’s house would come to see and marvel at the white man’s modern tools. They especially made use of the old grindstone to sharpen their crude hunting knives. (The framed drawing of the Engel log barn is in the possession of Robert and Juliet Engel Schertz. They kindly allowed it to be photographed.)

One of the first Apostolic Christian groups was known as the Partridge Prairie Apostolic Christian Church. This congregation often met in the barn on the Peter Engel farm in which the first service of the Amish church had been held in 1833. When snow was knee deep in the winter and mud hub deep in the spring, this devout group would thoroughly sweep the barn, including the walls and rafters, and bake many loaves of bread in preparation for Sunday worship. Pieces of logs were carried into the barn and planks laid across the logs to serve as benches. Chickens sometimes wandered into the barn and someone would quietly shoo them out if they became noisy. Many persons attended the services and one family living at Crow Creek near Lacon drove to Partridge early Sunday morning in their log wagon. Some from Morton and Dillon walked twenty-five miles to services, leaving home at 2:00 in the morning to be at the church on time. At a service held at the Engel barn on July 1, 1866, there were 53 rigs in the yard for the morning service with still more persons attending in the afternoon.

One response by the Amish to the Neu Taufer (New Amish) movement begun by Froelich from Switzerland was the use of a rotating schedule of church services for four of the congregations. In 1854 the Partridge Creek Congregation joined with the Dillon Creek Congregation, die Busch Gemein, and the Delevan Prairie Congregation joined in having church services in these districts in rotation with each district having the service once every four weeks. The services were held in the member’s homes. Each district-owned some crude benches made of split logs with three legs. Since the services were held in various homes, the benches had to be carried to the place where the services were to be held that particular Sunday. The services lasted nearly the entire day with a noon lunch of coffee, coffee cake, bread, butter, apple butter, and bean soup served.

Andrew and Anna lived about four miles west of Washington (Section 18), Tazewell Co., IL. They had to drive or walk approximately ten miles to take a ferry to get to Peoria.  Andrew started to build a large brick home but passed away before it was finished. Children Andrew and Mary, who were young, carried all the brick for this home. In the 1873 Atlas, Washington Twp, 26N, Section 18, appears “A. Schrock” on the northwest corner of the Section. At that time Andrew, his son, owned the land.

One night Andrew stayed with his sister and family who were sick with cholera. The same night he became sick and died before morning, leaving a family of small children, the oldest sixteen, the youngest was born after his death.  One of the children in later years finished the large brick home, using the original plans; half of the second story was planned to be used for church services.

The Schick farm joined the Schrock farm and not far from these farms is the old cemetery (now called Guth Cemetery) where the Andrew Schrock and his daughter Susanna (and possibly the Joseph Schick family) are buried. (Andrew’s son, Andrew, married one of the Schick daughters.) The cemetery is a small plot with 15 or so markers, some of which are nothing but pieces of stone. There are a half-dozen or so Guths. One readable stone is for Peter Guth, born in Ransbrunnehof, Palatinate. He was born 1806 and died 1886. His wife was Susanna Oyer. Peter Guth owned the land containing the cemetery. His wife Susanna was a sister to Andrew’s wife Anna, providing the Schrock family access to cemetery plots in the Guth burial grounds. 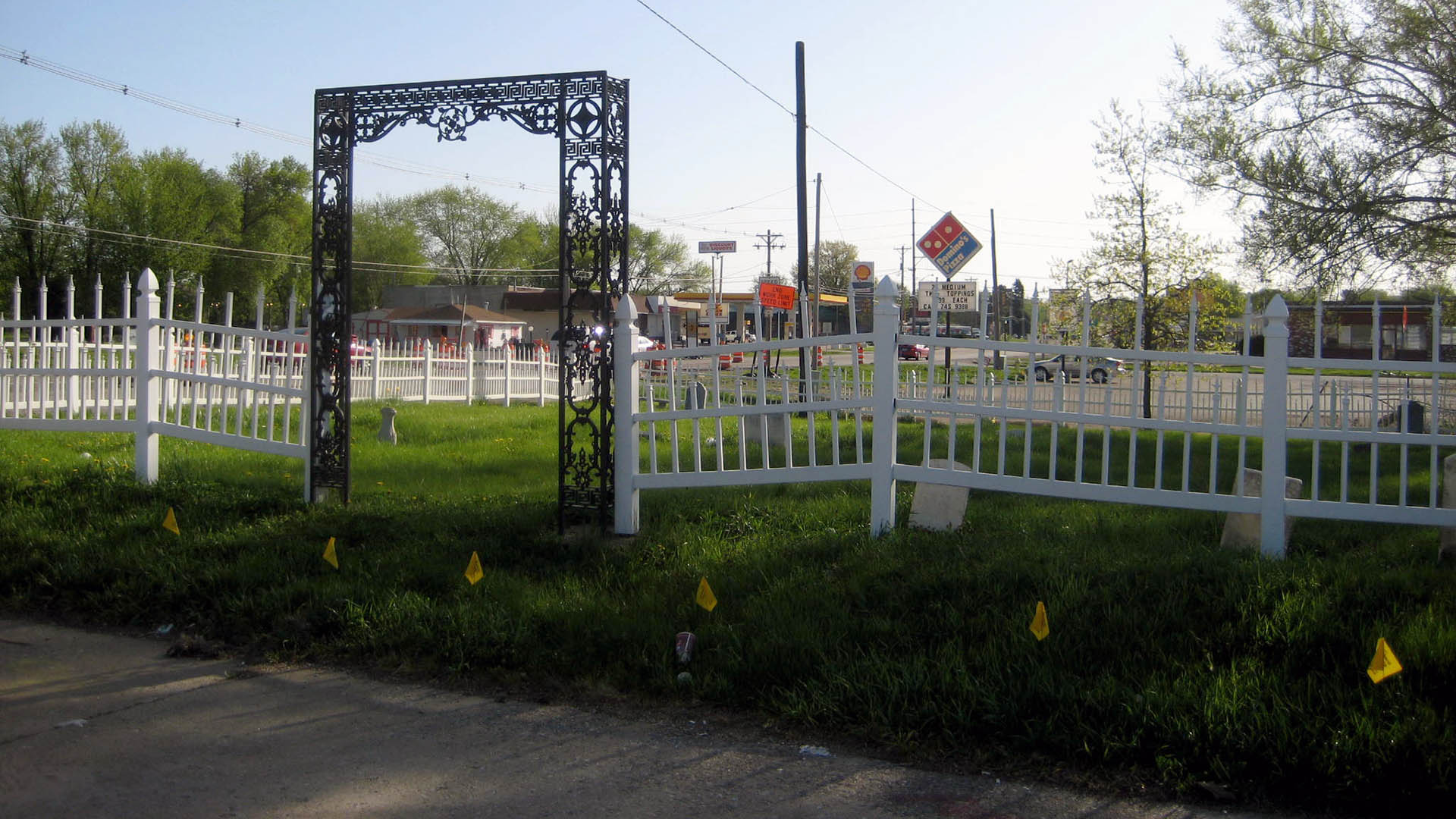 No. 3 – Pekin homestead of Johannes Schrock and Nearby Railroad Cemetery

While living in Butler Co. Ohio, Johannes had been hearing of land in Illinois where acres were cheap and crops were abundant. So in 1850 he took three horses and pushed through from Trenton, Ohio, to Pekin to take a look at this new west.  He liked it. He left one horse in Illinois and drove the other two back to the Buckeye state.  He broke the news to his wife that they were moving to Illinois where he had found land to purchase. According to land records, Johannes had made arrangements to purchase land from the Neukirk family before the family arrived.

In the autumn of 1850, Johannes and his family moved to Tazewell County and located near Pekin. They first lived in a log house on a farm owned by Andrew Ropp (now the Allen Miller farm) five miles east of Pekin. They were made at home by these Amish Mennonites, known to them in France and already settled in Illinois, and so they prospered. They were surrounded by Gerbers, Heisers, Ropps, Ringenbergers, Birkeys, and a few more recognizable names.

Johannes and his family were counted in the 1850 Butler Co., Ohio, census and were still there in October. They turned up in Tazewell in November and the land sale was completed in December. Helen Neukirk, the widow of Abraham Neukirk, owned a home at the southern edge of the Gerber farm (diagonally across from the present location of the Bethel Mennonite Church). At the turn of the 19th century, it was a stage depot on the route from Peoria to Indianapolis. 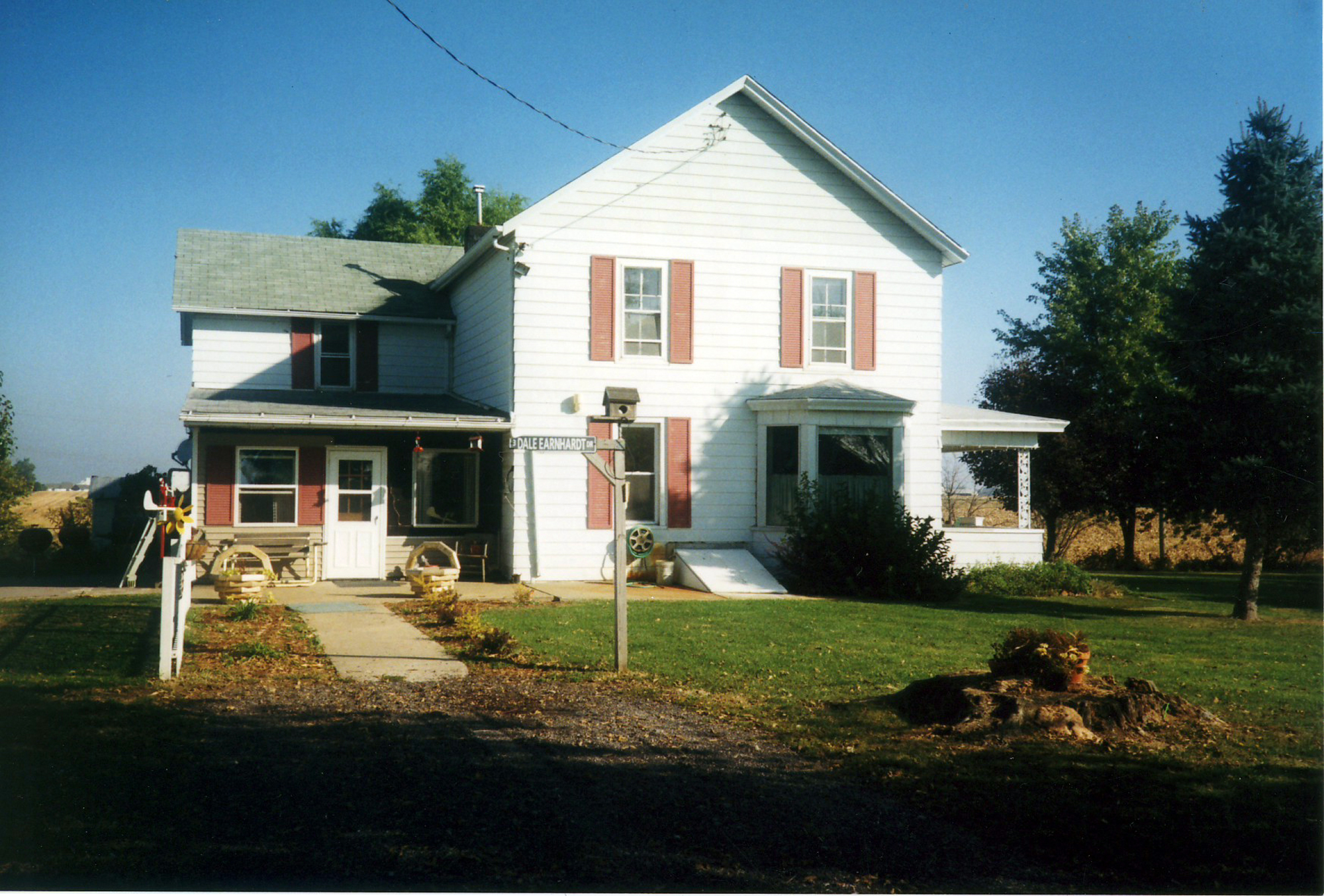 No. 4 – Congerville home of Magdalena and Christian and homes of Joseph Schrock families

Magdalena and Christian lived in the country near what later became Congerville, Woodford Co., IL. Christian died in 1855 of cholera in his log cabin home. Three days later Magdalena died, followed by the death of her nineteen-year-old daughter Barbara, and a few hours later by her six-year-old son John. There is yet a house on the site of the log cabin, but it has not been determined if the log cabin is still a part of the remodeled home.

The Joseph Schrock farm, son of Johannes, and a well-to-do and successful farmer and stock-raiser of Montgomery Township is located on Section 22. Joseph died in 1901 at age 73. The village of Congerville, begun in the spring of 1888 as a town named Schrock, is situated on a portion of his farm. The History of Congerville reports he owned about 320 acres of land, divided into two farms. Some of the land was bought in 1864, the year he first came to Woodford Co. He improved the land with fences, trees, buildings, etc., and as he improved his lot he purchased more land. Before moving to Montgomery Township, Joseph resided about seven years in Roanoke Township–the second place in which he had located after moving to Illinois in 1850.

The History of Congerville tells the story of the town’s original intention of being named Schrock and the ultimate decision to name it Congerville. In 1887 the Nickel Plate Railroad was being built from Bloomington to Peoria. According to legend and history, the contractors completed the railroad as far as Schrock’s farm when they were halted by the severe winter that year. They settled there to wait for winter to be over. People moved to the railroad community, many seeking to participate in the building job. With this development, a town was formed on the land owned by Joseph Schrock and a plat was recorded Jan 7, 1888, naming the community Town of Schrock. The Schrock name was only attached to the town for one or two years. Eventually, the town was named Congerville after Ben Conger, an early settler who owned a considerable amount of land and had a reputation as a fine hunter. However, descendants of Joseph Schrock have an “inside” story about the name change.

Joseph’s son, Jonathan, moved into the homestead house with three children sometime after 1896. He built an addition to the west side for his mother Magdalena. 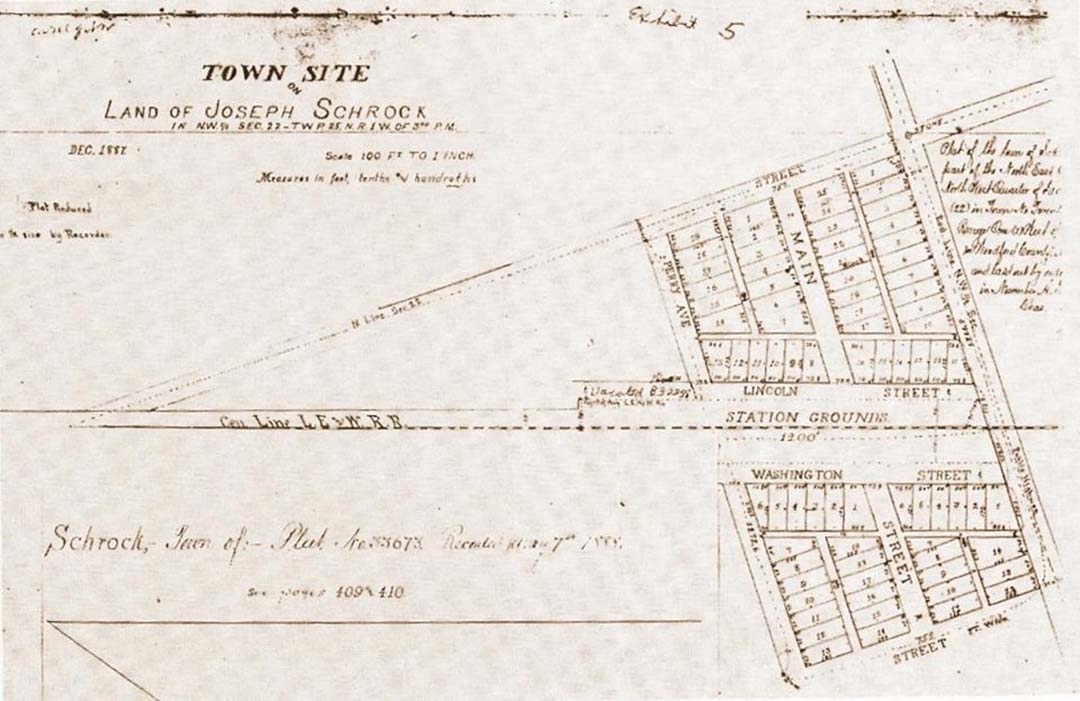 No. 5 – Belsly Cemetery, burial site of Barbara Schrock and Joseph Belsly – Nearby farm of Red Joe and his grandson Joseph

Twelve years after his marriage to Barbara Engel, Red Joe built a red brick farmhouse—it was demolished several years ago (2007/2008). Red Joe and Barbara Schrock’s only son would no doubt have lived in this house a few years before his marriage. Later, the house was painted white. The bricks used for building the house were made from clay dug up from Joe’s land. The barn, which has been gone about ten years, was made without nails. This farm has been in the Belsly family since the day Joseph purchased it and is considered to be the oldest one-family farm in the state.

The first burial of Red Joe and Barbara was somewhere on his farm. Joe’s widow, Barbara Engel, lived until 1881 and was also buried on the farm.  At some time after the deaths, the graves were moved to a different location—into a family cemetery near the homestead on Lourdes Road. Both wives were buried in the same grave, but the stone only names Barbara Engel. This could be the reason why Red Joe’s first wife, Barbara Schrock, was all but forgotten by the Belsly family. 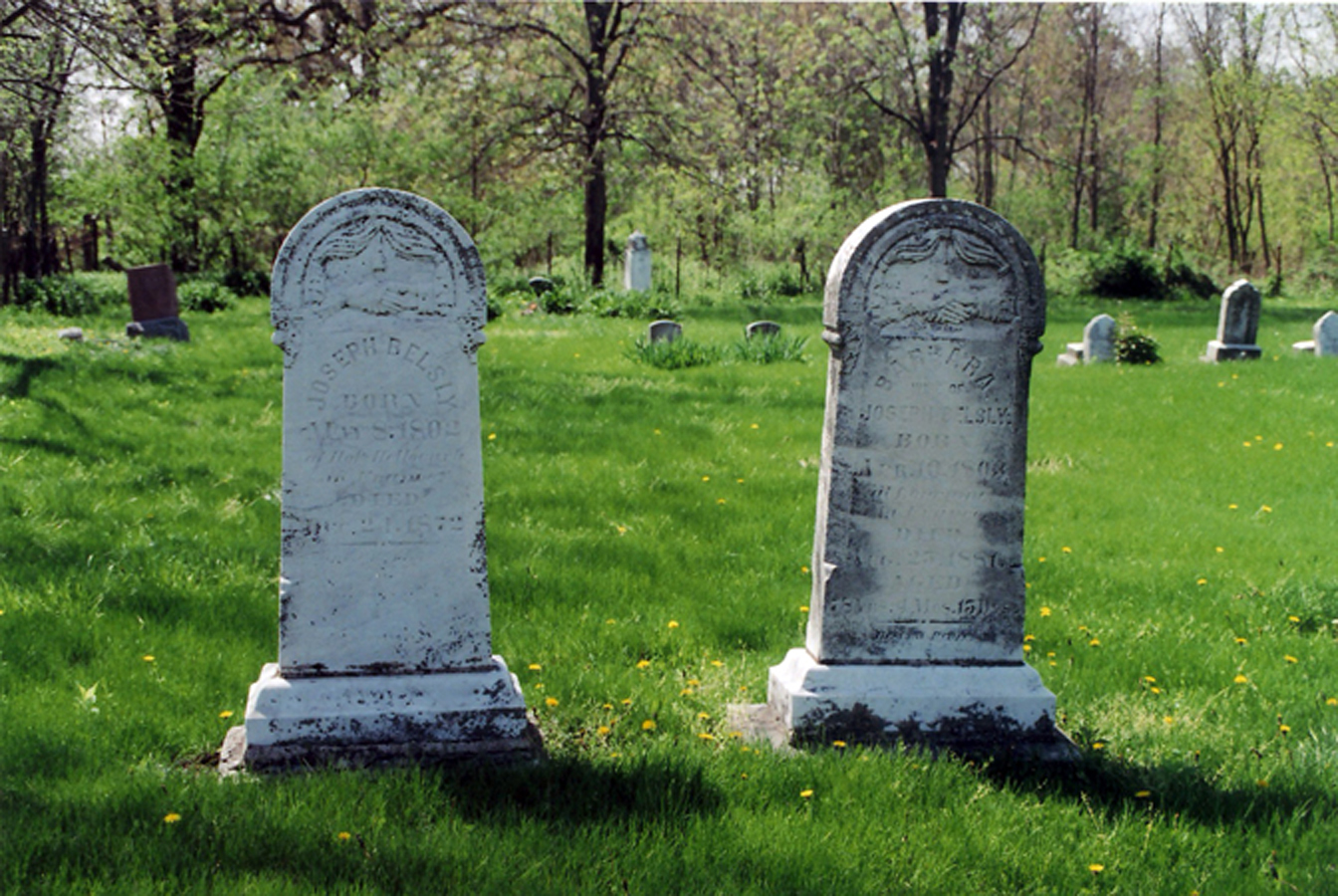 The graves of Red Joe and his wives in the family cemetery on Lourdes Road in rural Metamora. Both Barbara’s were buried in the same grave, but only Barbara Engel is named on the stone.