This material was used in the Peter Schrock presentation at the Illinois Mennonite Heritage Center’s “Schrock Immigrant Day” on June 19, 2010. The presentation was made by Donna Schrock Birkey.

(The following is for personal use only and not to be used in published form without permission.)

France and Emigration to America

Peter Schrock was the second child born to Joseph and Marie. While older brother Johannes’ birth document has not been found, his marriage document states he was born in Gondrexange. Siblings before and after him were born there, and Peter’s birth document confirms his birth in that village. As an adult, Peter worked as a miller in Europe and after emigrating to America purchased land in Ohio and owned several farms.

While still in France, Peter married Magdalena Zimmerman. Their recently discovered marriage record tells us:  On Aug. 25, 1827, Peter Schrag, apprentice miller, 25, b. at Gondrexange, Meurthe June 15, 1802, living in Robert-Espagne, son of Joseph Schrag, unskilled laborer and Maria Neuhauser, living at Rhodes, who did not attend the civil ceremony in Robert-Espagne but instead forwarded official notice of their consent via a royal notary at Sarrebourg, married Maria Zimmermann, a day worker, 26, b. in Emmendingen, [Grand] Duchy of Baden, Apr. 17, 1801, daughter of majority age of Jacob Zimmermann, unskilled laborer, and Elisabeth Becher his wife, both living in Robert-Espapgne, both of whom attended the civil ceremony. Banns at Robert-Espagne on Sundays, Aug. 12 and 19, at noon, and at Rhodes and Blamont on the same dates [Rhodes is where Peter’s parents lived and Blamont is where Johannes and his family lived at the time]. All being in order, Peter Schrag and Maria Zimmermann are man and wife.  The four mandatory witnesses [the first two customarily for the groom, the second two for the bride]:

After their marriage in Robert-Espagne, the residence at the time of Peter and his in-laws, the couple remained in the nearby village of Dompcevrin, Meuse, through the birth of their first two children and
most likely until their emigration in 1831.

The couple raised eight children. After Magdalena died in 1862 in Butler Co., Ohio, Peter married another Magdalena–Magdalena Rediger. Her gravestone reads: Magdalena Rediger, the Frau von Peter Schrack. Geb. [born] 25, Ockt, 1829; Gest.[died] 23, April 1896. Underneath is inscribed in German Ps. 17:15: And
I—in righteousness I shall see your face; when I awake, I shall be satisfied with seeing your likeness.

Peter arrived in Baltimore in the spring of 1831 with his wife and first two children.
The arrival list reads as follows: Peter Gerrard, 30, male, Miller; Peter age 3; Mary, 21 female; Madaline age 1; but it was not until 24 years later that Peter became a naturalized citizen. His brother Johannes was naturalized in 1844.

The listing of Peter’s family was preceded by the Johannes Gerard and Michael Salzman families, and followed by the Zimmerman family. The ship’s manifest may have been lost or destroyed, as no researcher has come across it, but this list is from the 1831 quarterly summary of arrivals at the port of Baltimore. (Johannes is listed as Jno. Gerard, and sister Magdalena was on board as well.) 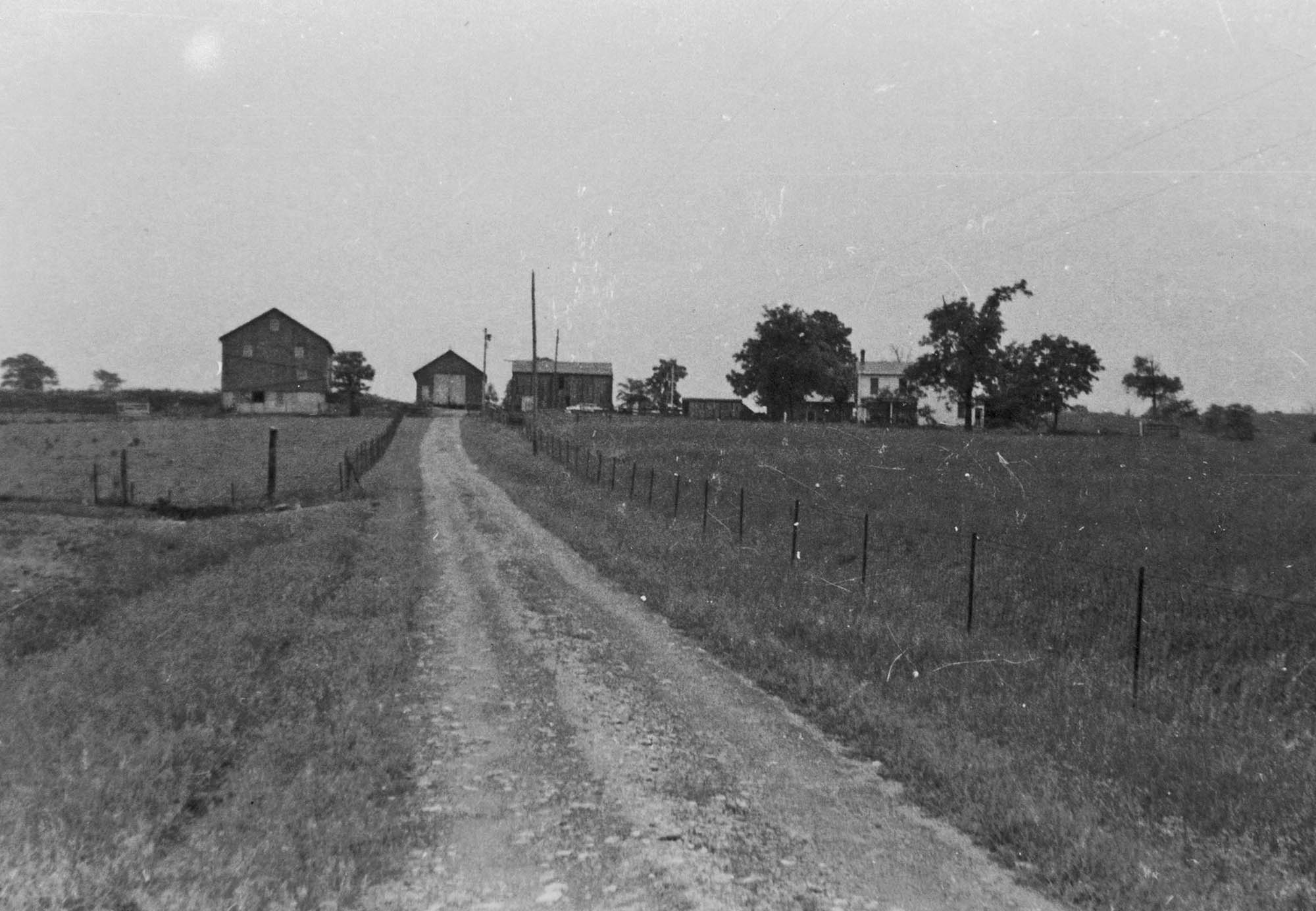 Peter either had someone lease his first 81+ acres on his behalf in 1829, or he had made a previous trip to Butler Co. before bringing his family in 1831. He leased another 81+ acres in 1833 and after fulfilling the two lease agreements, Peter purchased from the State of Ohio the 162 76/100 acres he called Fairview Farm.  This farm was sold in 1988 and no longer exists. It was on Rt. 63, Middletown, Lemon Township, once in view of LeSourdsville that lay to the west.

Peter also purchased 210 acres from Samuel and Susan Hull that was Woodsdale farm. The present-day address is 4870 Augspurger Rd., Hamilton, St. Clair Township. The original Woodsdale home and barn can still be seen from the highway on high ground overlooking the Great Miami River.  One of Peter’s young grandsons, John, while living at Woodsdale Farm with his parents  (perhaps about 1875) decided he could fly. He jumped out of this barn loft and broke both arms!

Sunnybrook Farm was purchased by Peter, Sr. sometime between 1850-1860, then it was sold to his son Peter Jr. in 1862. The house and farm is listed on the National Register of Historic Places. This property on the edge of Trenton is now surrounded by other buildings.

The house originally had a side porch but now has an addition in its place. There is a two-bay porch of cut wood with brackets at the roof line, detail of dentil and corbel trim, and remnants of the original smokehouse . This farm’s bank barn with its date of 1878 has been moved to a new location and is presently the residence of the nationally known barn restoration expert, David Gaker and his wife.

Early in the 1830s Peter was appointed a minister of the Augspurger church. When that church divided in 1835 over friction brought about by German Hessians arriving on the scene, Peter Schrock and Jacob Augspurger remained with the Augspurger group. The Hessian Mennonites had “worldly” goods consisting of books, pewter mugs and plates. After the division Peter was appointed a minister of the conservative “hook and eye” congregation. Peter held meetings in his brick home and his descendants still refer to the front room of that house as the “church room.” That particular house is no longer standing.

In 1862 Peter attended the first Diener-Versammlung in Wayne Co., OH, where 400-500 people from up to 900 miles apart attended. On the agenda was the proper manner of baptism, the role of deacon, and the particular Butler County friction about luxurious dressing, musical instruments and worldly entertainment—all were voted not to be permitted.

In 1863 a meeting house was built in St. Clair Township on Gephart Road. At about the same time the Hessian group was incorporated as the Apostolic Mennonite Society and they purchased land on Wayne-Madison road from John Good to be used for a church site and cemetery. Both meeting houses stood into the 1900s and the cemetery is still used today. After separating in 1835, the two congregations merged again in 1897.

A document from 1877 reads: To the brewers appointed to brew and locate a road on the 14th inst (instant) according to a notice given in the Butler County Democrat of a late date said Road to run through the land of the heirs of Peter Schrock Sen, Woodsdale Butler County Ohio the undersigned. The proposed route of said road and after due deliberation do claim that the following damages as estimate are reasonable and pray your honorable body as viewers of such road to grant as follows for extra fencing and land, One Thousand Dollar  $1000. June the 14th 1877.

Item 2 of Peter’s will stipulated that Peter’s second wife be paid $2,000 in cash–requested because of an anti [pre]-nuptial contract made between Peter and his wife in lieu of her dower in his real estate and in lieu of all statutory provisions and allowances for the benefit of widows. Peter Sr. left his house and lot to Peter Jr., and “to my said son Peter, and to my granddaughter Lisetta Kinsinger, I give all the rest and residue of my estate to be divided between them, share and share alike.

“The reason why I have given to my son Peter my house and lot in Trenton is that he remained with me about eight years after he became of age and largely during that time assisted me in accumulating my property, and has ever since been a kind and considerate son. And the reason why I have given to my son Peter and my granddaughter Lissetta the residue of my estate is because my other grandchildren have commenced partition proceedings in the Common Pleas Court of Butler Co, to sell my two farms in Lemon and St. Clair Townships, for which I made deeds to my four children in 1868, with the understanding that I was to have the possession and use thereof during my lifetime.” The family of Peter was not immune to wrangling over his properties as he reached the end of his life.

At the sale on Oct. 29, 1887, one chopping ax was purchased by Mary Zimmerman for 25 cents; Jos. Rupp paid $1.60 for some anthracite coal; grandson Joseph A. Schrock paid 50 cents for 6 Windsor chairs, and quilting frames went to Mr. Cooper for 50 cents.

Coincidentally, Peter, Jr. married two wives (consecutively!) with the same first name just as his father had done. He first married Elizabeth K. Augspurger and after her death at the age of 37, Peter Jr. married is first wife’s second cousin, another Elizabeth Augspurger.

Descendants of Peter, Jr.
Joseph A and Lina Augspurger.

Homer Hyde and Caroline Thienemann. According to a journal notation by his father Joseph, Homer had a thorn in his foot from August 1898 to Oct 1900–over a year!  Homer had three sons including Eugene who preserved much of the family’s history.  There were five additional living children.