“Recently I found indications that the Amish Zehr name may have roots in the very early Zehringen family. The House of Zahringen has roots dating back to the late 900s with at least 25 generations of Margraves. There is a lot of info on the Internet on this family with royal connections to all the major royal families in Europe. Berthold the fourth Margrave of Baden in 1264 founded the cities of Bern and Freiburg in the province of Bern, Switzerland. This is the same area that the Zer, Zeer, and Zehr name has early roots. When I looked at heraldry about fifteen years ago one of three coats of arms indicated nobility with a similar Zehr spelling. In one encyclopedia, the Zehr name is given as an early contributor to history in this area. The name Zehr in Switzerland means “boarder.” —Ray Zehr.1 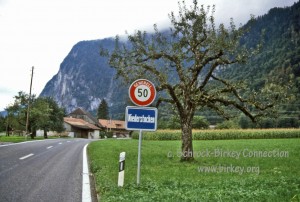 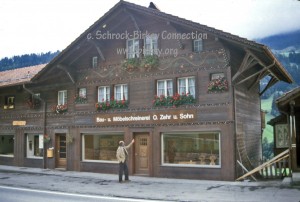 Christian Zehr was born in Niederstocken to parents Peter Zehr and Barbara Schultz.3 At the age of 12 he moved, most probably with his parents, to Struth in Bas-Rhin. While living in Struth he married Elisabethe Koch, born 1724. Their children were Daniel (1734-1819) and Christian (1762-<1798).

Donnebachemueller, near Struth, was a Zehr home in the late 1700s

mayor of Struth in the mid-1980s, herself a Zehr, related to me that both her father and grandfather were born there. It is quite possible the property was also home to Zehr families who later emigrated to Illinois. More research is needed to verify the possibility.

Daniel Zehr, the oldest son, was born 1782 in the village of Struth. Despite The Historical Encyclopedia of Illinois and History of Tazewell County statement that Daniel Zehr’s wife was Catherine Ringburk, documents tell a different story. Rather, the marriage records at Windstein reveal he married Magdalena Unzicker, b. 8 May 1785, in Windstein, Wissembourg, Bas-Rhin, to Johannes Unzicker (1747->1802) and Barbara Ullmann. Daniel and Magdalena were married 6 Jun 1803 in Windstein.6

In 1803, Daniel and his wife with son Daniel, left Struth for Bavaria where he entered into a two-year lease on the dairy farm Abtsried of the Wessobrunn cloister. After the lease expired, they lived on the Bergerhof at Laim from 1810-1817.  On Dec. 2, 1818, Daniel purchased property at Manried, which was sold Dec. 15, 1827.  From 1828 the family lived at Hanfeld where Magdalena died on 16 Dec 1838 at the age of 53. All of these communities were near Munich.8

Daniel emigrated from Mang-Anwesen in Hanfeld as a 72-year-old widower in 1849 with the family of his nephew David Springer.  He joined the group departing from Bremen on the ship Minnesota, sailing via Liverpool to New York, arriving 21 June 1849.9 Many in the group then traveled directly to Central Illinois, where Daniel was reunited with his sons George, Christian, Peter, and Jakob/Jacob; oldest son Daniel followed in 1853, leaving only son Joseph remaining in Bavaria. 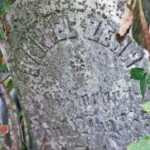 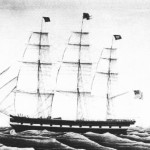 and Magdalena Litwiller (1801-~1855). Peter’s new wife was also a descendant of Christian Zehr and Elisabethe Koch, from their second son Christian, making Peter and Elizabeth second cousins once removed.

By 1850 Peter and Elizabeth lived in Tazewell County next door to his brother George, who was listed on the census as a brewer. At the next census in 1860, they lived next door to Peter’s brother, Christian, in Mackinaw Township on the Mackinaw River’s Rocky Ford area. Their homes stood high on the hill overlooking the Mackinaw Valley. By 1870 the couple was in Deer Creek Township, with seven children. In April 1886, Peter died and was buried in Slabtown Cemetery. Elizabeth lived ten more years and died 21 Mar 1896 at Foosland, Champaign County, and was buried at East Bend Mennonite Cemetery. 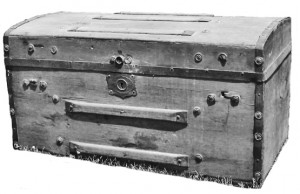 It was first thought the trunk shown above traveled with Peter (1818-1886) on his journey, but later research dated it to the Civil War era, making it more likely that it was purchased after his arrival in America.

In 1914, Peter started the practice of an all-day meeting on the Fourth of July, including morning session, noon basket lunch, afternoon and evening sessions. The year before, in 1913, Peter writes in his church record book that “an evening service was held at East Bend Church, Champaign Co., IL, on June 19, by the four brothers—Daniel Zehr, Peter Zehr, David Zehr, Samuel Zehr. A sermon was held again by the four brothers at Goodfield, IL, April 30, 1918.”12

Willard Smith in Mennonites in Illinois tells of the tense time following World War I: “At the East Bend church at Fisher, vandals splashed yellow paint only on the front door. They also put up a flagpole and flag. Some members wanted to remove it, but Bishop Peter Zehr instructed that it remain flying. It was left there until it became tattered.”13 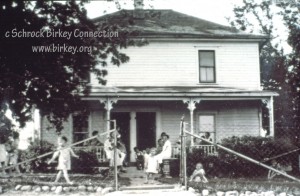 Peter died 14 Mar 1922 from complications of Bright’s disease. His wife, Barbara, died 16 Nov 1934, at 77 years of age. Both are buried in East Bend Mennonite Cemetery.

Zehr. – Bishop Peter Zehr was born in Tazewell Co., Ill., Aug. 24, 1851; died at his home near Fisher, Ill., Mar. 14, 1922; aged 70 y. 6 m. 18 d. He suffered from a complication of diseases. He bore it very patiently. He was married to Barbara Heiser of Morton, Ill., June 8, 1876. To this union were born five children (Mrs. Catharine Cender, Dan P. Zehr, Mrs. Lizzie Cender, Mrs. Amelia Birky, and Joseph A., who preceded his father in his infancy). He leaves 15 grandchildren, three brothers, and three sisters. Five brothers and 1 sister preceded him to eternity. He united with the Mennonite Church in his youth. June 10, 1883, he was ordained to the ministry in Deer Creek, Ill. In 1893 he was ordained bishop in charge of the East Bend congregation near Fisher. He was known for his heart concern for the flock. His last prayers were for her welfare. The funeral was held Mar. 17, 1922, conducted by Bros. Samuel Gerber, C. F. Derstine, and Ezra B. Yordy. Text, I Thes. 4:14; II Cor. 5:1.

The Ministry of the Bishop 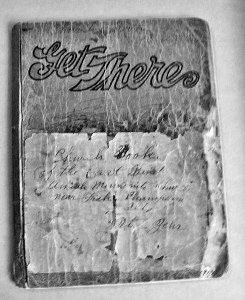 The church book of Peter Zehr was a nondescript notebook, probably purchased at a local variety goods store–perhaps Koyen-Kenward in the village of Fisher.  Peter’s words written on the first page describe its use, “about some Family Records and about the East Bend Church organized.” It contains records of baptisms, marriages, deaths, church letters given and taken from one church to another, trustees and church committees, and “superintend and assistend.” Also included are Peter’s notes of significant happenings, such as the locust years:

To accomplish the 1895 construction of the original East Bend “churchhouse,” Peter records collections of funds from the following churches:

NOTE: Peter Zehr’s church book is in the possession of great-granddaughter Kathy Cender Martin, with a copy in the archives of East Bend Mennonite Church, Fisher, IL. The trunk was with other items belonging to Peter Zehr, and now is held by great-grandson John Cender.