Author’s note: While attending Ropp Immigration Day in Metamora several years ago I noticed a coverlet displayed in the Illinois Heritage Museum and thought it an intriguing piece of history. The item was a 79” x 80” friendship coverlet belonging to Elizabeth “Lizzie” Litwiller, made up of blocks embroidered by friends and relatives to commemorate her marriage to John Augsburger on 13 Dec 1893. The coverlet is made of white cotton with red embroidery. Esther (Mrs. Melvin) Glick had donated the coverlet, pillow shams and extra blocks to the museum after the death of her mother, Ella Augsburger, Lizzie’s daughter.

I asked about the coverlet—do we know who all the persons are and what their relationship is to Lizzie? The answer was that there had been an early attempt but the results were incomplete and not entirely accurate, and no one had taken the time since then to research further. Carolyn Nafziger put me in touch with Edith Nafziger in Goshen, Indiana, a granddaughter of Lizzie. Edith was interested in researching the names and relationships a bit more, and also supplied me with scans of pages from a diary she had in her possession that was kept by Lizzie over a period of years. This added much human interest and provided a picture of Lizzie’s life for about 10 years–from age 22. until her early death at age 32. Jo Ropp sent several lists of possible family connections, as Lizzie was a part of the large Ropp family through her mother. Little by little the blanks were filled in and now only a few are left unidentified. Perhaps after this article is published others will be able to supply missing information.

As I collected the various pieces of information I was able to chart it and put together a bit of the fabric of Lizzie’s short life. In the process I found her intersecting with some of my own family for the few years she and her husband John lived near Fisher. But because John was not a believer in photography there were no pictures taken after their marriage of him, his wife or young children.

Joseph Litwiller (1837-1902) and Mary Ropp (1841-1920) were married 8 May 1862 in Tazewell County, Illinois, by Bishop Michael Mosiman. Joseph had acquired a homestead at Tremont and built a house on the land in the 1860s. The couple’s third child and second daughter Elizabeth “Lizzie” Litwiller was born 13 Jan 1867. Our story of Lizzie begins with her life as a young, single woman in Tremont at age 22. Picking up from Lizzie’s diary in 1889, she writes of attending church, working at household duties such as taking up a carpet, blacking the stove, sewing and filling the bed, frying sausage, and picking wool. She names a few visitors at the home, and at the end of the year comments that the New Year will bring her a new dress.

Over the following two years her diary records normal daily activities of washing clothes (usually on Monday), scrubbing, churning butter, picking geese, coloring rags for rugs, patching mittens, and “sewing Emma’s bonnet.” In July Lizzie said she “helped pick and can 56 qt. b. berries.” Another day she writes, “worked 30 buttonholes and sewed on 40 buttons,” then a few days later records that “Lida Davis gave me a thimble.” Perhaps Lida found out Lizzie had done all that work without a thimble? Most Saturdays were inscribed: “Sat.’s work.”

There are two mentions of John Augsburger in 1892: “Letter from John Augsburger,” and written one day between Christmas and New Year’s, “Work and knit, John Augsburger and Ben Litwiller here.” John and Lizzie evidently made known their intentions to marry during 1892, as many coverlet blocks are dated in that year.

The diary year 1893 is empty. One would guess that Lizzie was busy preparing for her marriage on December 13, the subsequent move to Champaign County, Illinois, and her new life as a farmer’s wife. Many more coverlet blocks are dated 1893, building on the one’s begun the year before.

On February 24, 1894 the newly married Lizzie andJohn moved to a house near Tomlinson, two-and-one-half miles east of Dewey and six miles east of Fisher. At the time, Tomlinson was basically a grain elevator stop on the Short Line railroad between Rantoul and Havana, part of the Illinois Central Rail Road. Havana is located 20 to 30 miles southwest of Pekin, a straight shot west of Rantoul following Route 136. It was this line that made it quite handy for Tazewell County relatives to visit the Augsburger family in Tomlinson, and vise versa.1

Very quickly that same year Lizzie easily took up the same work as she had been doing before marriage of keeping the house clean, sewing, planting, canning, but with a few new activities added: gathering seeds and nuts, setting incubators, baking bread. Her parents and other relatives visited, and Lizzie also records, “Drive to Hopedale for Conference.” There is an entry, “House work, finish pillow sham.” This was no doubt made from the blocks her friends had embroidered and given to her, for during the next year (1895) Lizzie comments, “Sew stitches on friendship spread” and “sew Mary Ropp block.” The blocks had been presented to Lizzie separately and she sewed them together into the coverlet.2

New names would appear in her notes in 1895—friends from Dewey and Fisher. Lizzie mentions visiting Dewey and the Griesers, as well as the Pete Schrock family in Fisher. The Grieser family was very likely George M. and Magdalena Baecher Grieser who lived in Dewey and were near to Lizzie in age. The Schrock family could only be my great-great-grandfather Peter Schrock and his wife Anna (Nancy)Garber who had a daughter, Lydia, about the same age as Lizzie. On another occasion, a Sunday in October, Lizzie reported, “I and children at home. John Schrocks here for dinner and Somers here in eve.” John and Mary Schrock are my great-grandparents, and two weeks later evidently Mary returned and brought along her mother (Fannie Sutter Birky, wife of Andrew, my great-great-grandparents) as she made an entry, “Mrs. Birky and Mary Schrock came.” Mid-November, “Sleeping preacher here 3 nights.” If this entry follows the same format as all the others, we can assume the Augsburger family entertained the “sleeping preacher” [John D. Kauffman?] in their home for three nights.

That same year the Augsburgers spruced up their house a bit by removing the wallpaper from the kitchen walls and painting it and a few other rooms. They also attended a conference in Elkhart, Indiana, taking the train east first to Chicago and Goshen, then “walked four miles to D. Johns.” After returning home by train, the same day Lizzie “brushed clothes and pounded bones.” Evidently Lizzie did some sewing for others for she records that she “sewed for Mrs. Geo Eichelberger,” and she “sewed a coat for Christ Eichelberger” on the same day that she “put away fruit under the sofa.” Two weddings were important to Lizzie that year: Amelia Unzicker and Cousin Lydia (Lydia Ropp, who married Allen Miller).

Marriages continued to show up in Lizzie’s dairy at the beginning of 1896, with Emma and Ben Litwiller’s wedding on January 2 and Mary Litwiller and Joseph Springer’s on February 9. But then came a big change of routine for the couple. On March 6, son Allen was born. The diary shows that husband John took on some of the household chores until other help arrived: “John helped me wash and baked cookies.” Then, “Ma came and Mrs. Hitzler worked here,” and a day or so later, “Pa came. Pa and John went to church.”

A few months after Allen was born, Lizzie wrote, “Wash. Go out in field with baby,” and toward the end of the year she sewed a baby dress and shoes, celebrated her wedding day anniversary on Dec. 13, and with the baby “went home to Tremont.”

John and Lizzie entertained quite a few friends and relatives during 1897: Anna and Martha; John and Barbara Heiser; Barbara Roth, Katie and Fannie Heiser; “Kansas Birkys here;” “Cousin A. Millers and his folks of Indiana came”—even a peddler and wife were put up overnight. Lizzie traveled to Picketsville and Stormer’s sale, and to Garber, IL. On December 11, a second child, Ella, was born. Again, Ma came to help. Before the end of the year Lizzie’s brother, Silas, was married in Indiana, but Lizzie stayed home with the baby and toddler and spent her time knitting and sewing while John attended the wedding.

The following year 1898, the last full year of Lizzie’s life, recuperating from giving birth Lizzie’s notes begin: “housework, nothing else for one week; Baby not well; I wash alone, bake bread, made cookies and sweep; to church for first time; Silas and wife came; “ [hired] hand came.” Her notes twice mention the doctor–once she traveled to the doctor and once he came to the house. A few months later she records that “we go to Urbana four days.” Could this indicate some kind of treatment for her illness?

The last entry in the diary is dated January 10, 1899: the simple, “Katie Rediger here” in another hand, most probably her husband John’s. Lizzie Litwiller Augsburger died February 11, 1899 of tuberculosis, leaving her husband, 4 1/2-year-old Allen, and Ella, two months past her first birthday.3

A close look at the names embroidered on Lizzie’s coverlet. 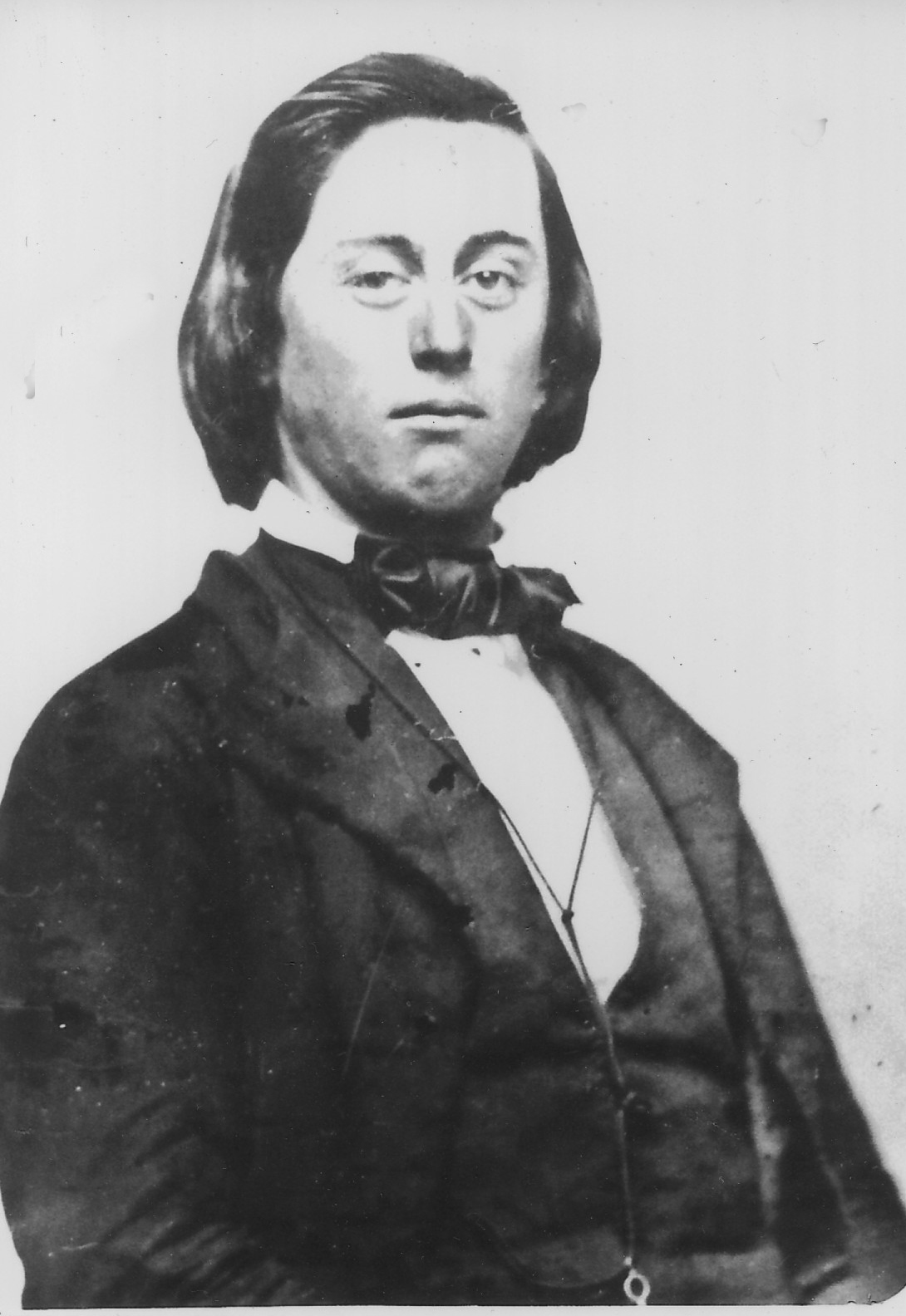 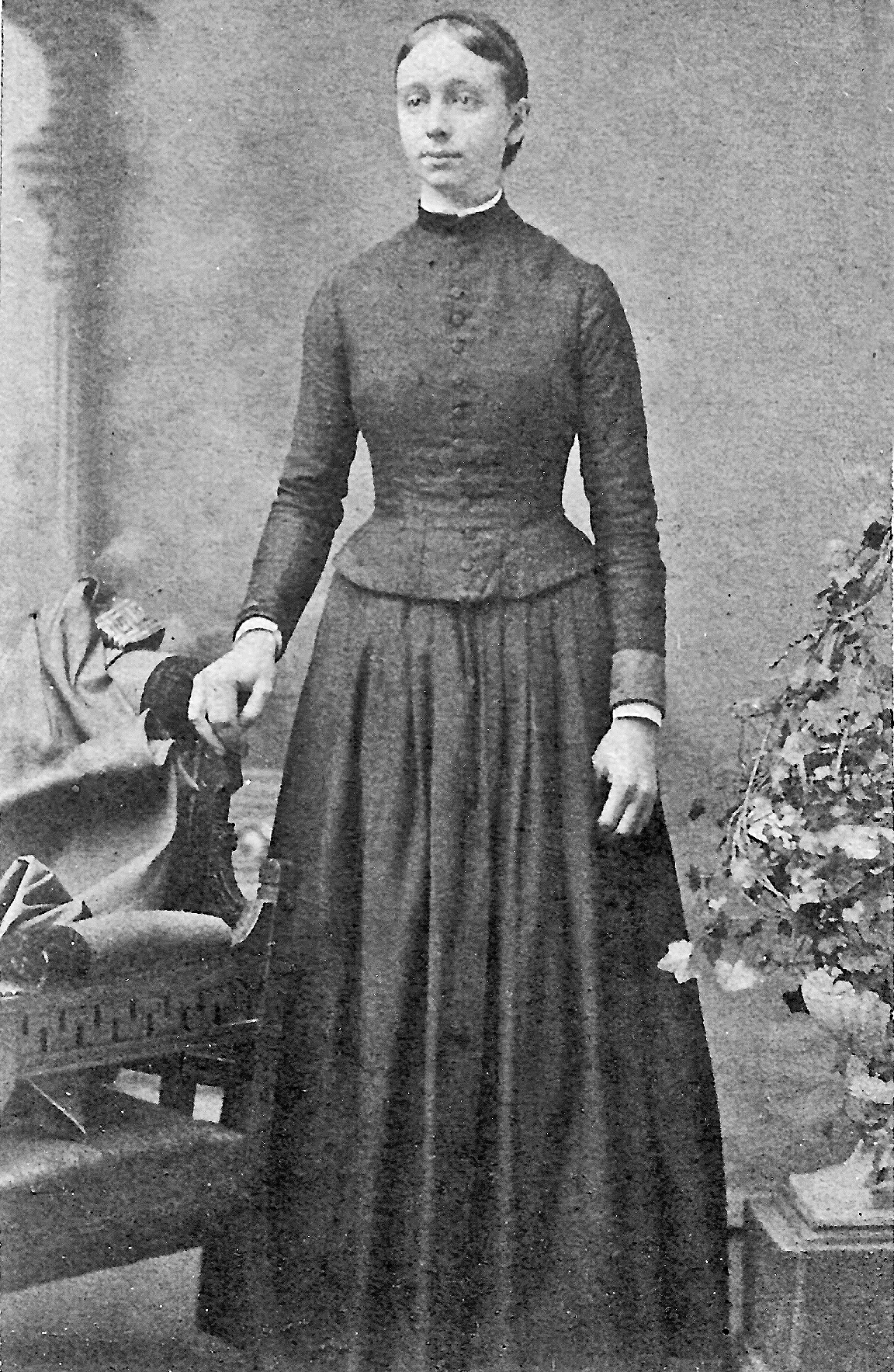 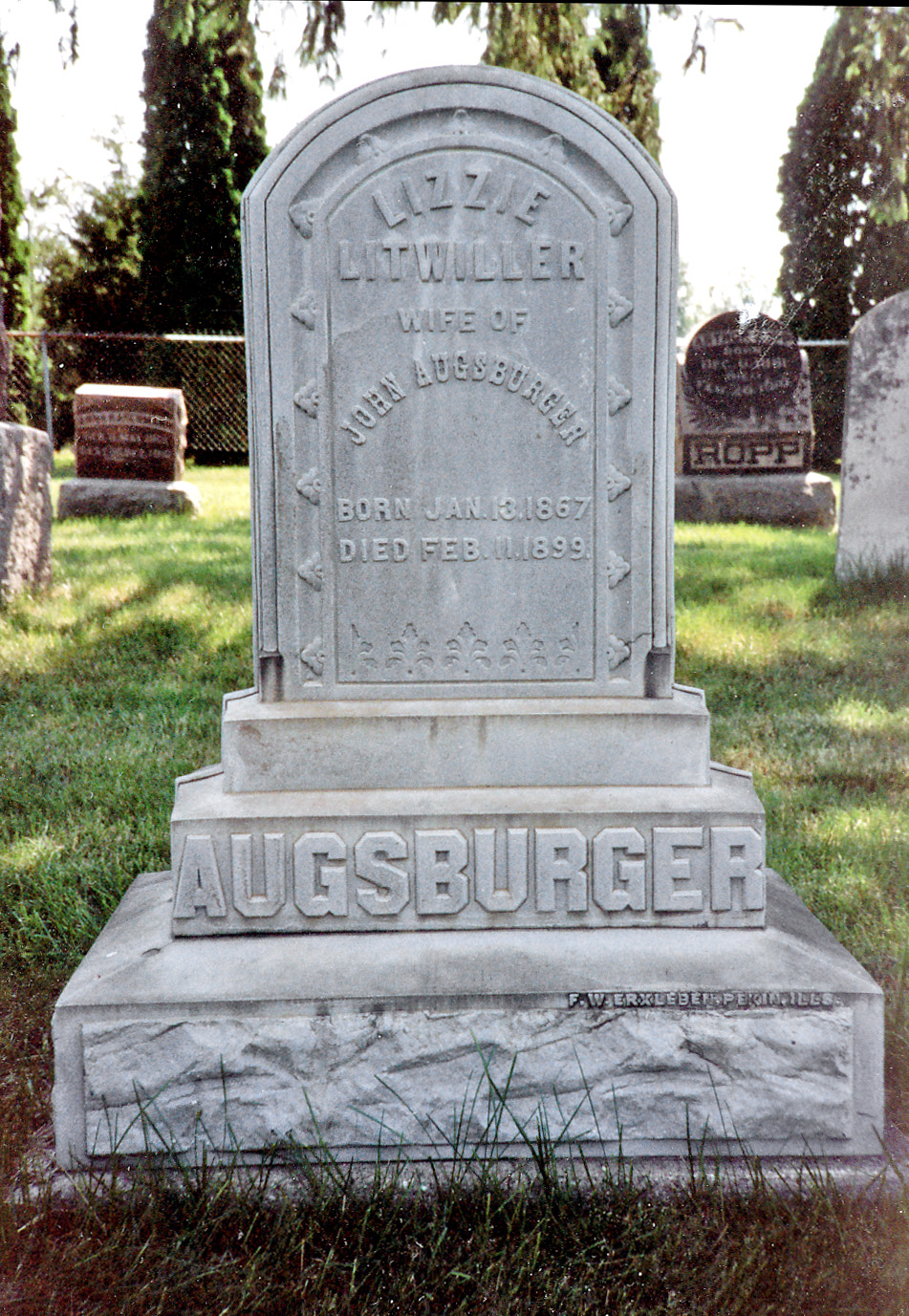 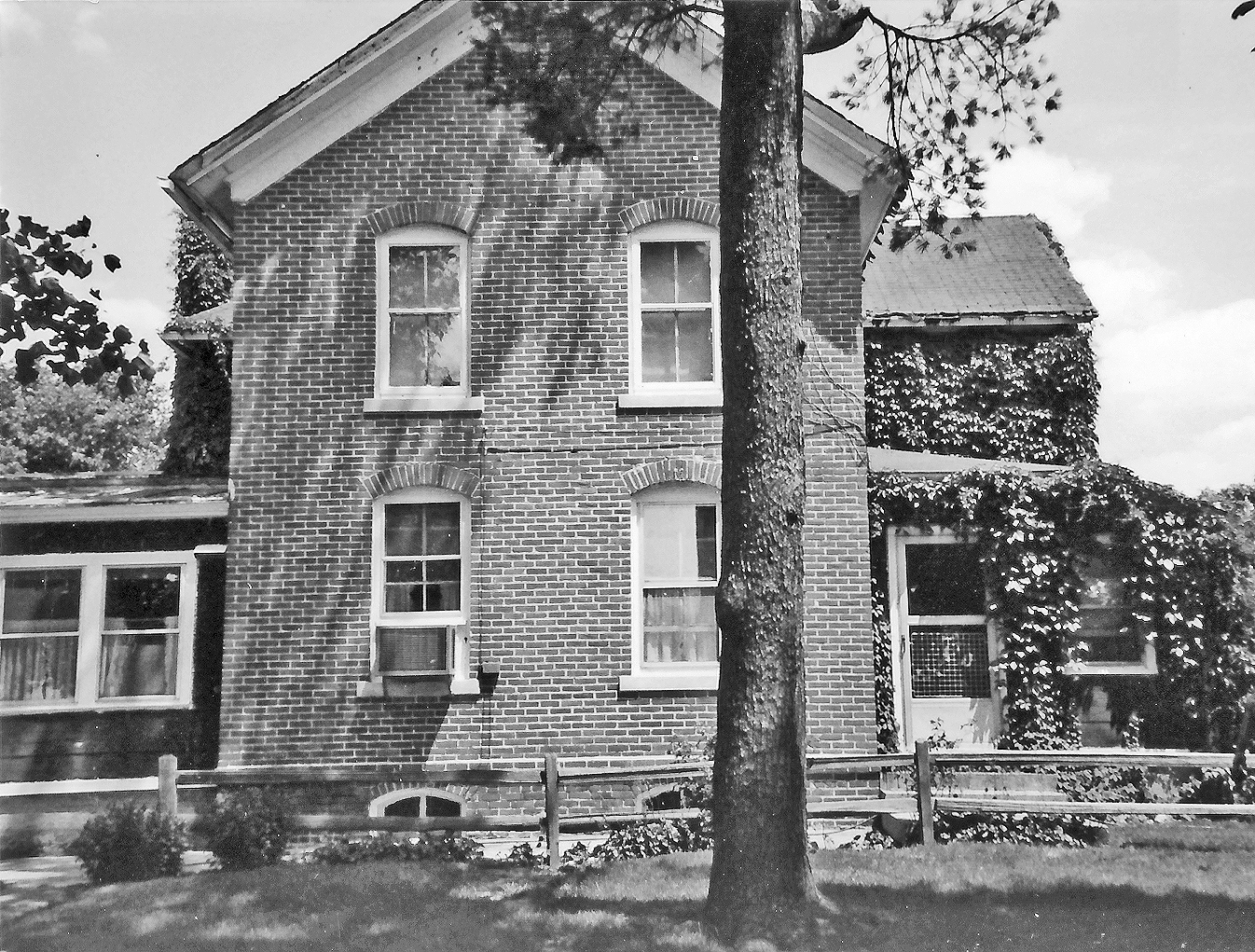 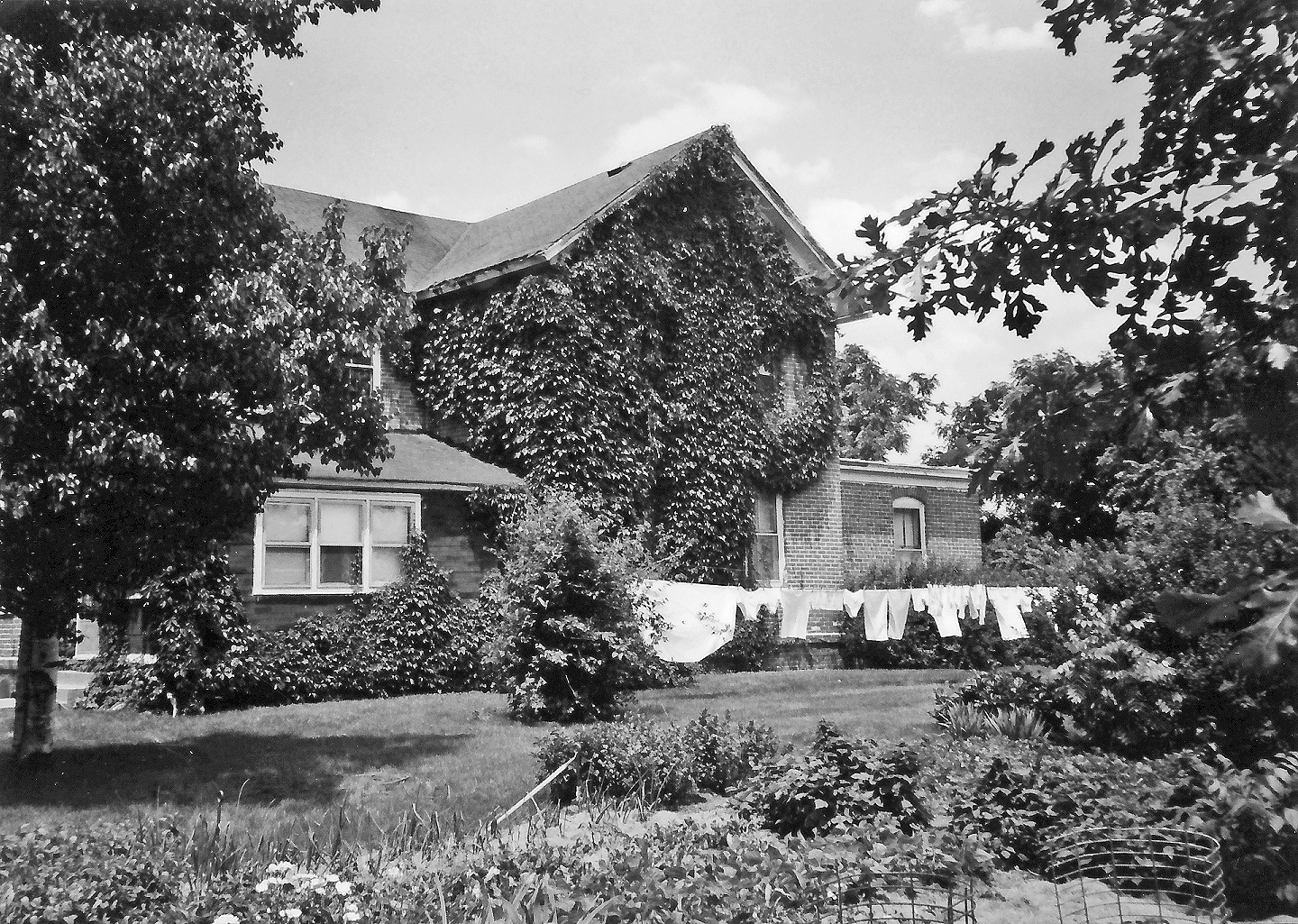 The Litwiller Tremont home built in the 1860s 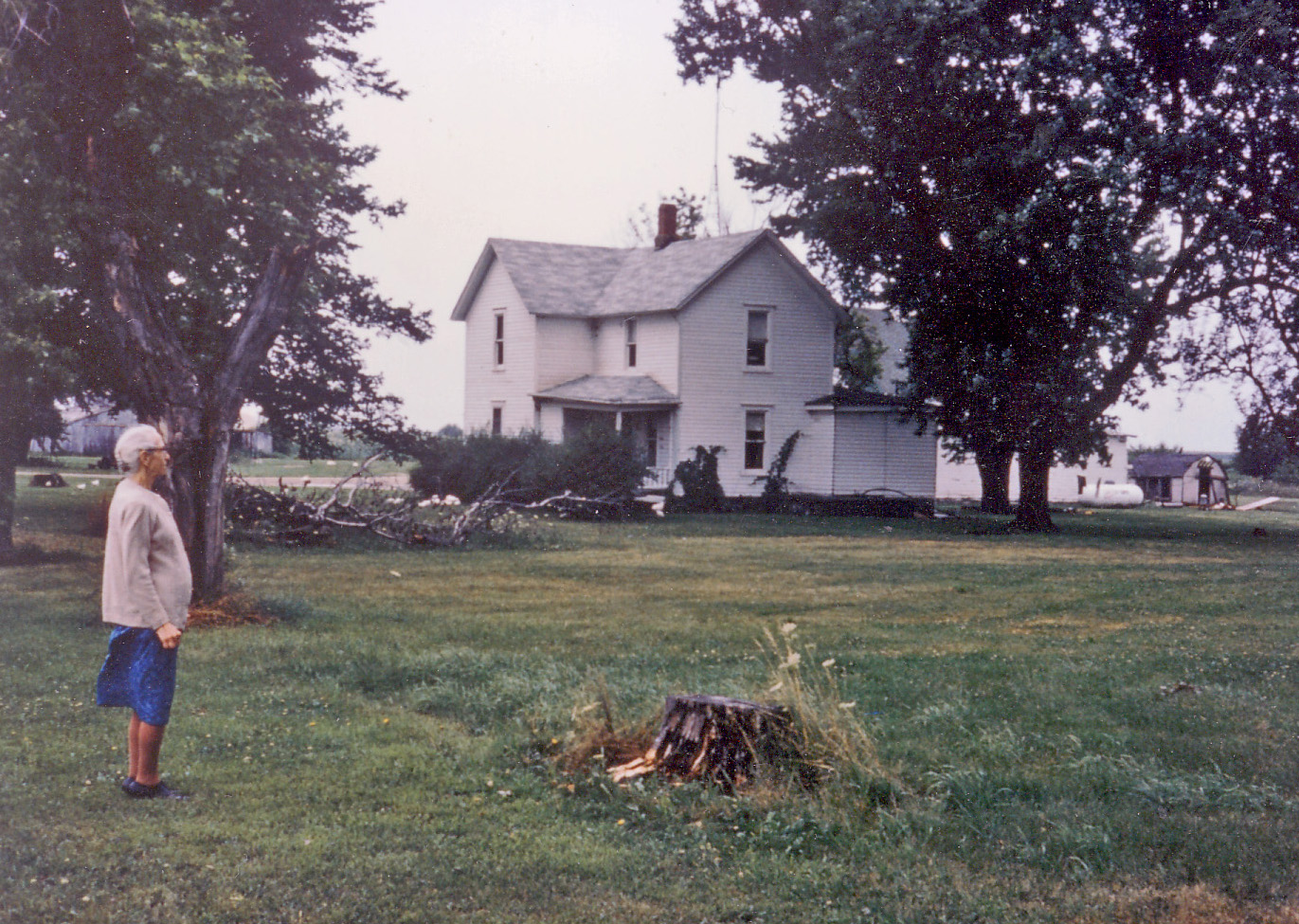 Lizzie and John’s farmhouse where their two children were born and where Lizzie died–with daughter Ella standing in foreground.

After Lizzie’s death John and the two children continued to live in the same house for several years with the help of a hired hand, Dena Griner, who cared for the children and household duties. In 1903 his father Noah died near Hopedale. It was probably then that the family moved to Hopedale and lived with hired help and John’s mother, Magdalena, caring for the children.

The following year, in 1904, John married a single lady, Fannie Wyse, from Wayland, Iowa. They had three daughters, one died in infancy. After John’s death of flu during the 1917 worldwide epidemic, Fannie and her two daughters, accompanied by Ella, moved back to Wayland. It was there Ella met her husband, Fred Swartzendruber (1895-1981).

John and Lizzie’s children, Ella and Allen, were willed an 80-acre farm close to Noah Augsburger’s 160-acre farm, Ella (1897-1974) and her new husband began their married life there in 1921. They had four children: Esther Augsburger Glick, Frederick J., Edith Augsburger Nafziger, and John Dale. Allen (1894-1927) lived on the Noah Augsburger farm, a centennial farm to this day. Allen married Louise Horsch (1897-1979) in 1918, daughter of Henry Horsch and Katherine Good of Fisher, and died in 1927 of appendicitis. They had no children.

1 These same train tracks go through Dewey and Fisher, and by the residents of those villages in the mid-1900s this line was known as the “punkin vine” because the train moved so slowly. There were never more than a few houses making up the small unincorporated railroad community of Tomlinson, and today only two homes survive from the past: the one for the railroad agent and the one for the operator of the grain elevator. Oral history of the village also includes the tale of a cold storage building for beer during the Prohibition era in the early 1900s. In a telephone conversation with James Murray who lived near Tomlinson for some years, I was told that a Ben Gifford influenced the Short Line to go through his land, and that the grain elevator was owned at one time by Leland Fowler, who also owned Fowler State Bank in Rantoul (now Bank of Rantoul).

2 For identification of each name on the coverlet, shams, and extra blocks shown below and their relationship to Lizzie, see the detailed information included in the printed article in Illinois Mennonite Heritage Quarterly.

3 It is unknown where Lizzie’s funeral service was held, but since there is no record of her death, funeral or burial in Peter Zehr’s record books of East Bend Mennonite Church in Champaign County, and since she is buried in Tremont, the service was probably held at the Pleasant Grove Church. 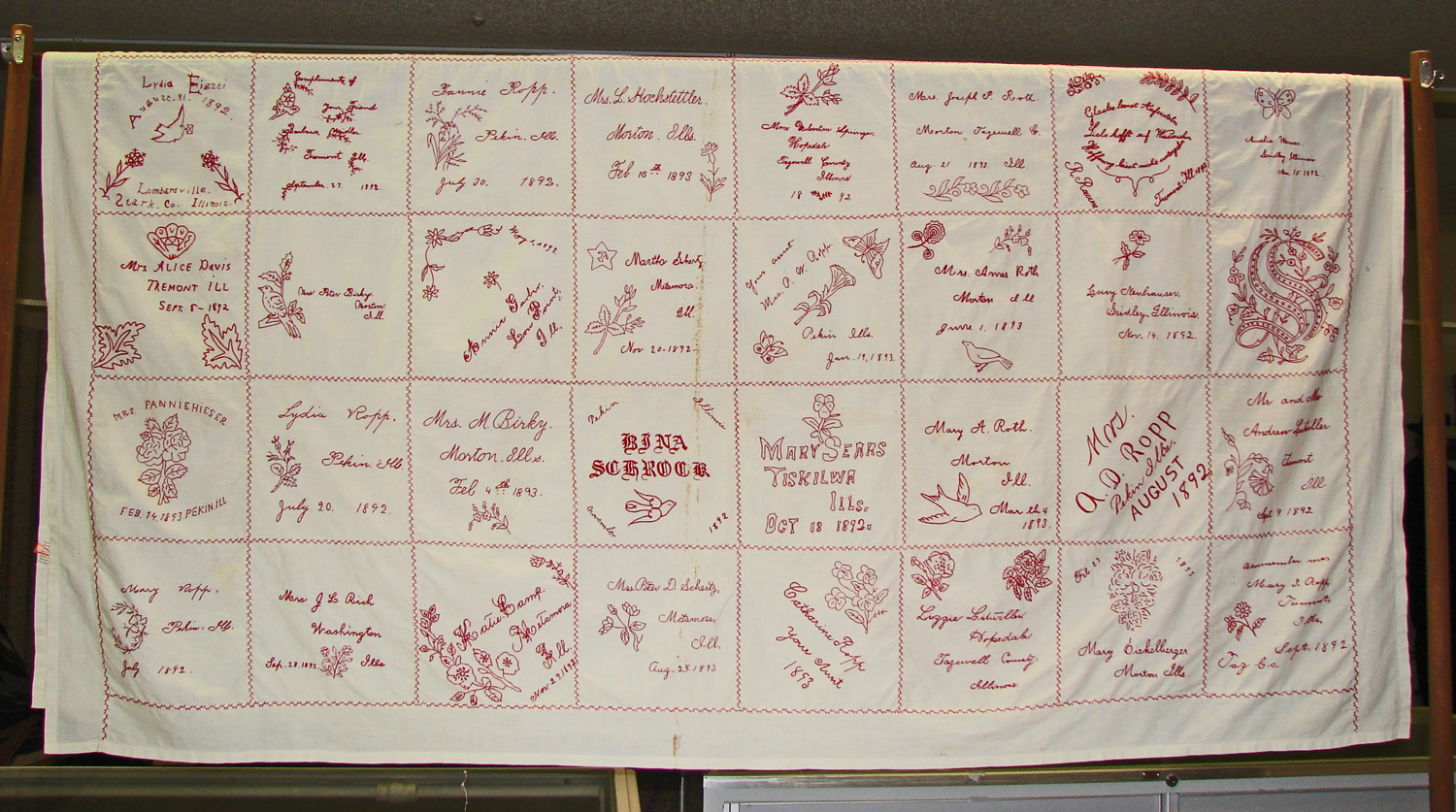 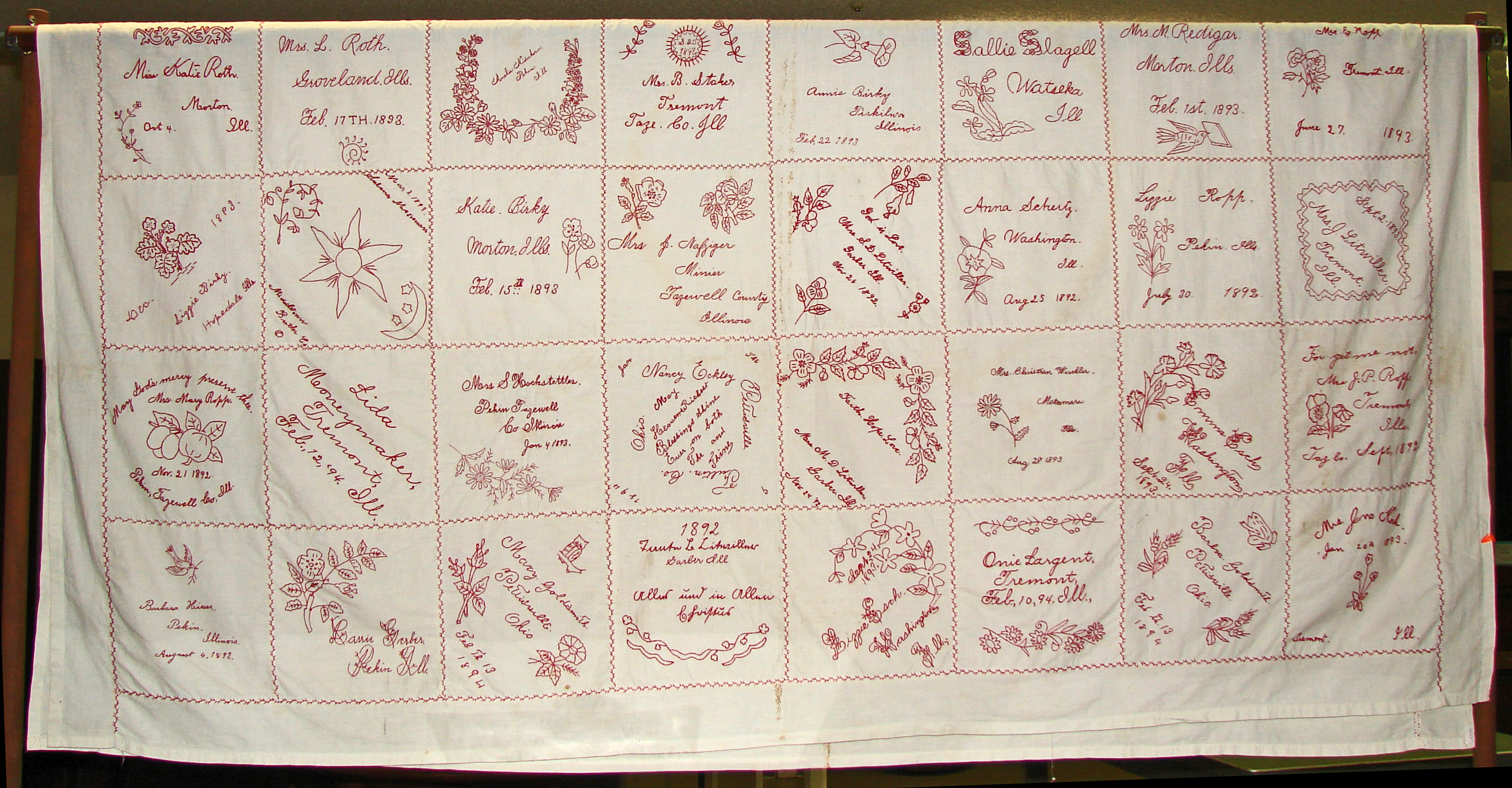 Side Two of Lizzie’s Coverlet 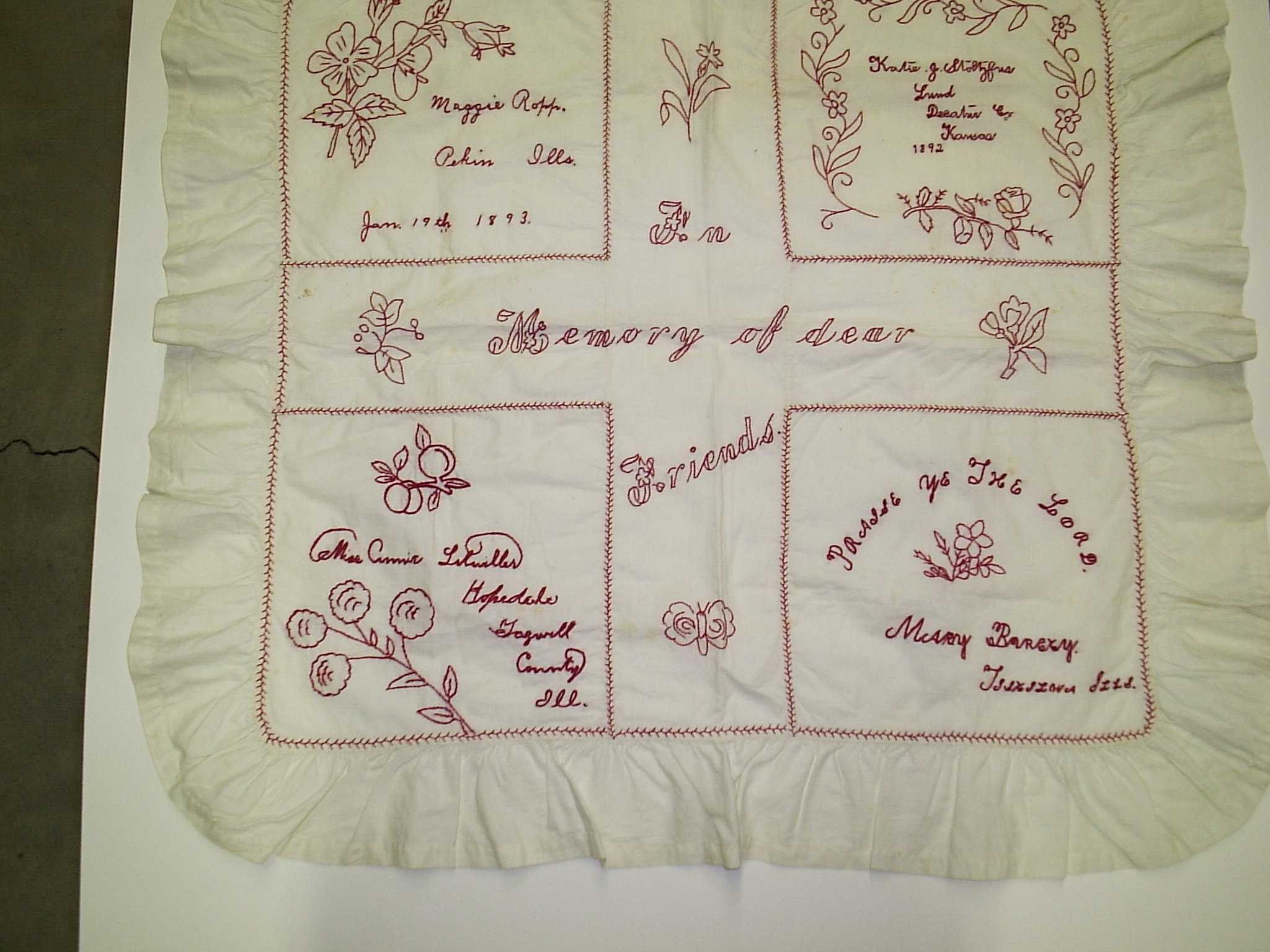 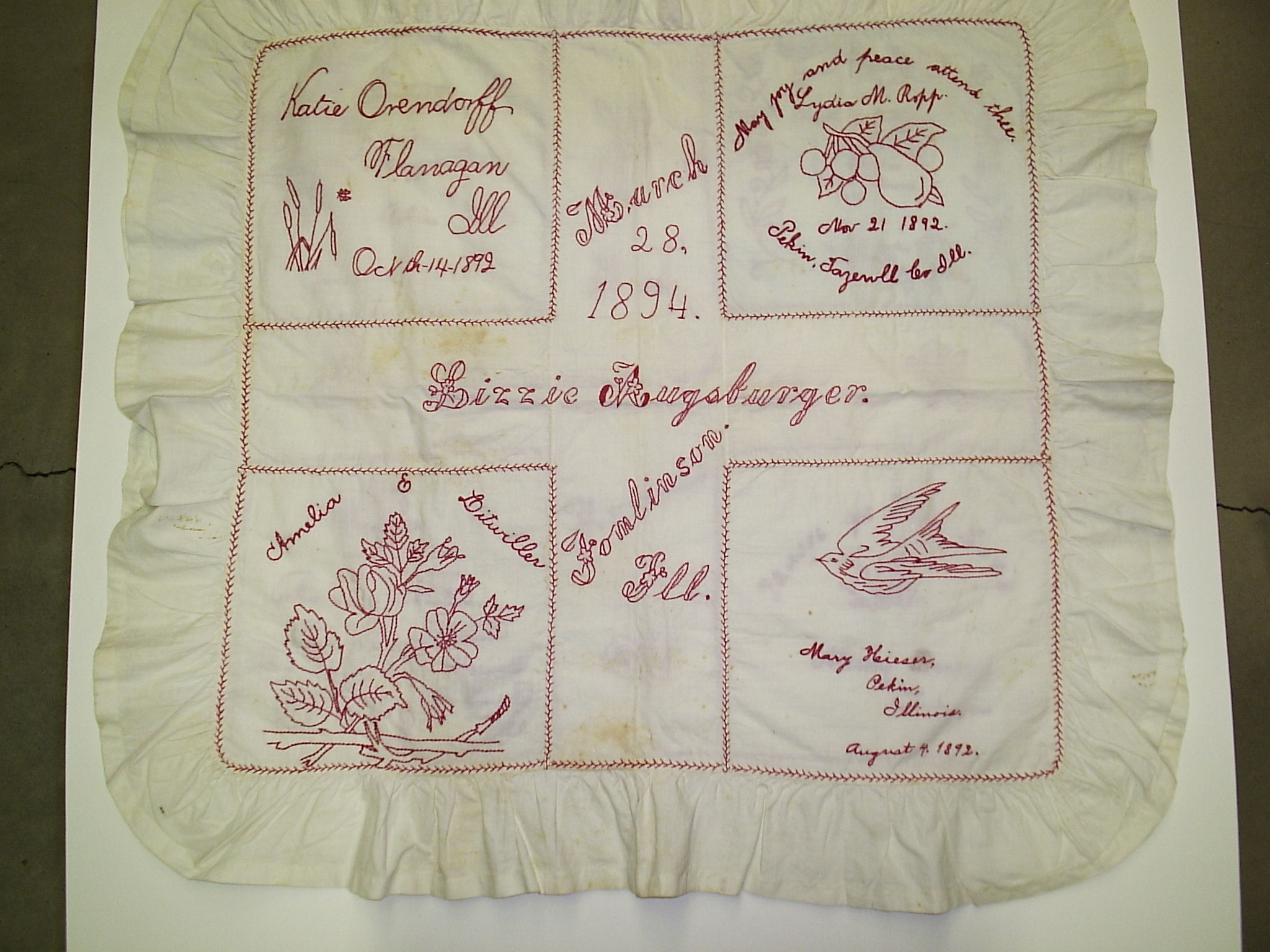 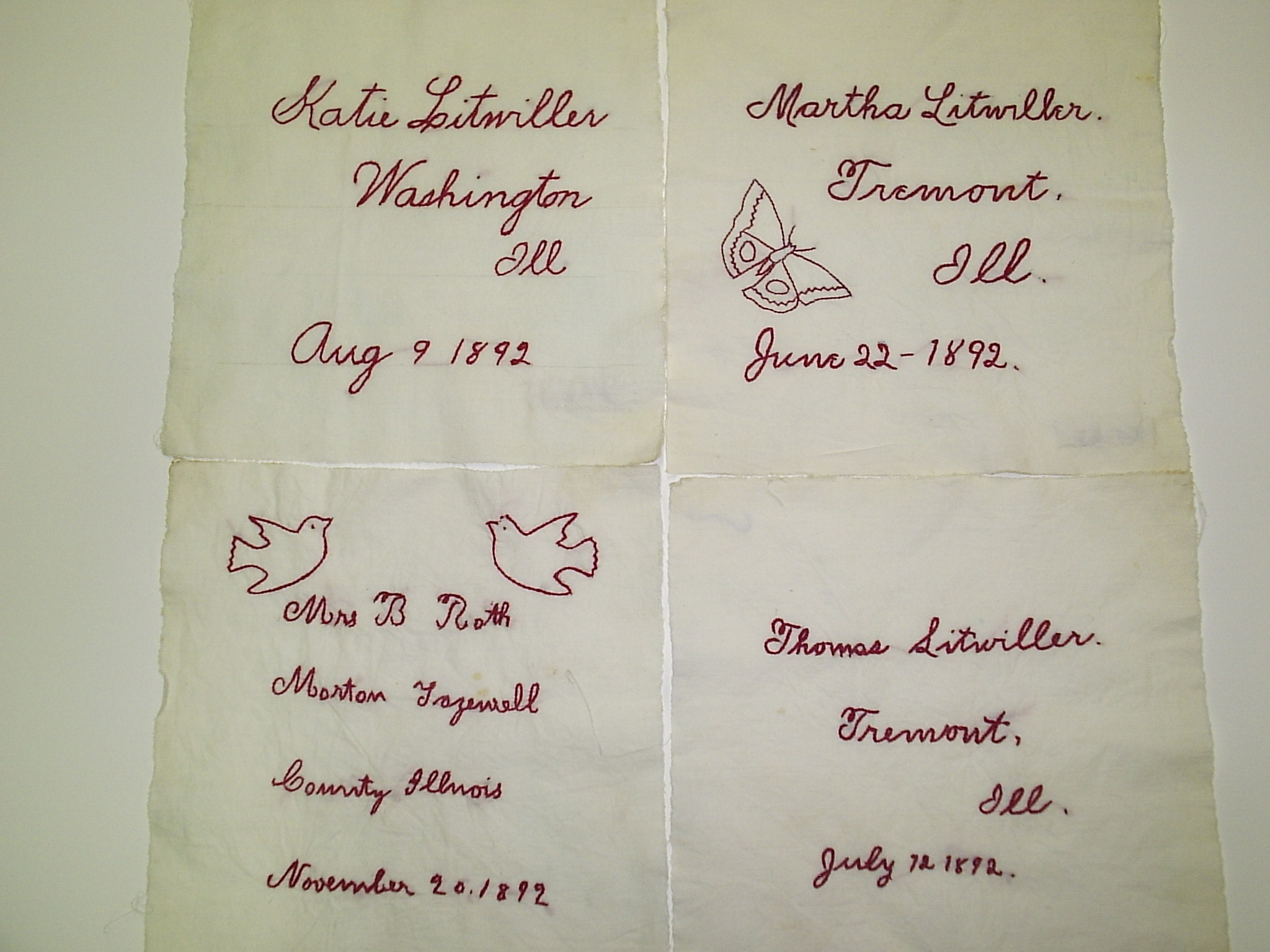 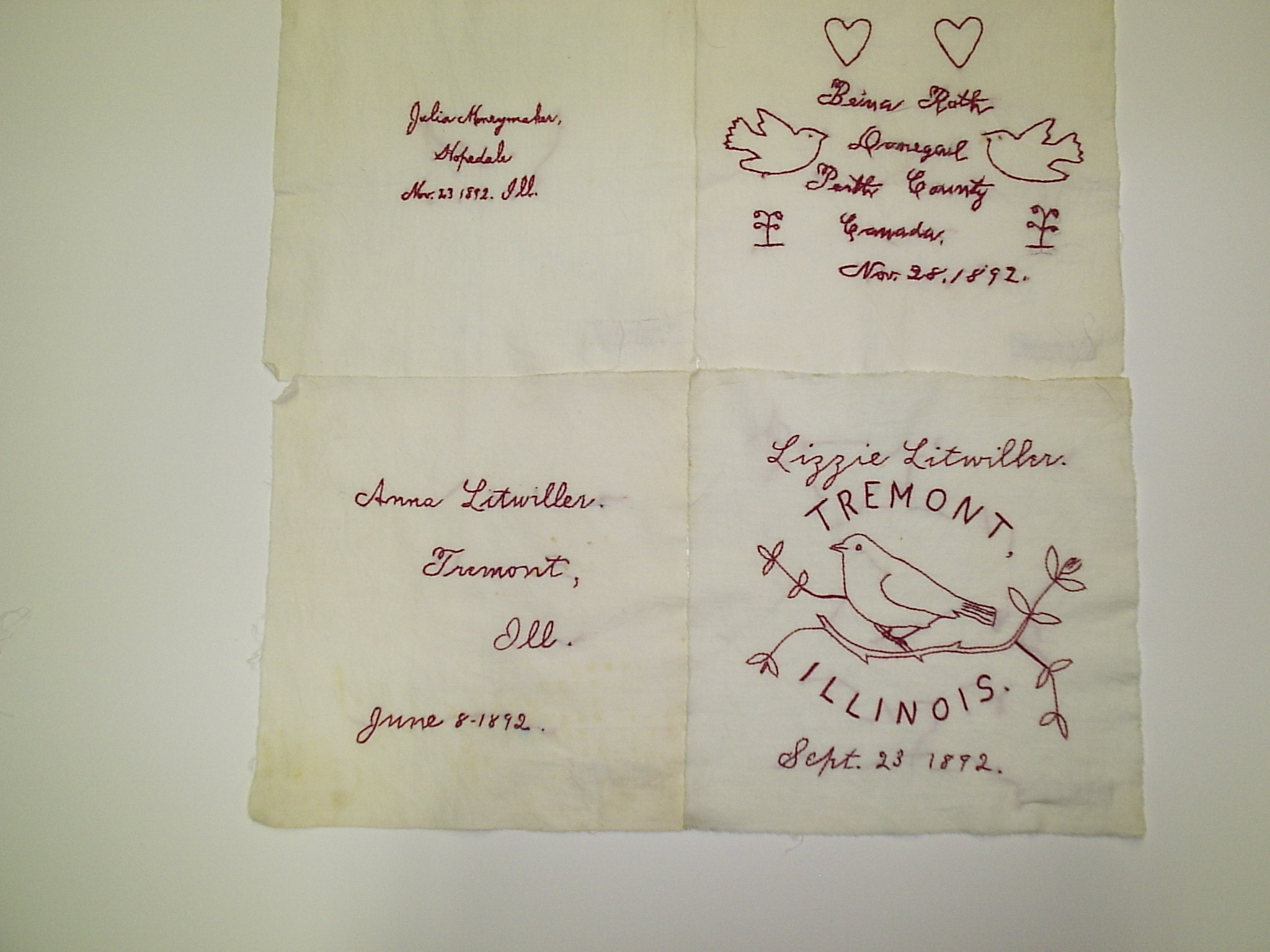