From England to Pennsylvania and North Carolina

John Mills probably came to America about 1708, along with Richard Harrold*, and worked in the construction business in Philadelphia for several years before moving to Maryland. There is not much known about his activities during this time.

His next appearance was in 1730 when he was described as John Mills of “Manoquisy near ye River Potomack” on his son Thomas’ marriage certificate, recorded at the New Garden Monthly Meeting [Quaker] in Pennsylvania.* A year later John, along with Thomas and Reuben Mills, witnessed a marriage at Monoguisie [Monocacy], Province of Maryland, but recorded at Nottingham Monthly Meeting, Pennsylvania.

“In the state land office at Richmond, Virginia are to be founded recorded in Book 16 the patents issued to settlers who came to the Shenandoah Valley under the authority of the orders in Council made to Alexander Ross and Morgan Bryan. All bear the date of November 12, 1735 and recite that the grantee is one of the seventy families brought in by them and excepting location and acreage are alike in wording and conditions, and are signed by William Gooch, Lt. Governor of the Colony at that time.

“John Mills, Sr no 35 1315 acres of land in Berkeley Co WV. The land is on Mill Creek between Inwood and Gerradstown with highway 51 along the North part and highway 24 running through the land. This information is from the book Pioneers of old Frederick County, Virginia by Cecil O’Dell.“ (From Hopewell Friends History 1734-1934. Pub 1936. Mills. Page 12.)

It was described in the patent as being “On a Branch of Opeckon, near but not adjoining Lewis MeMoss’ land.” [DeMoss?] In 1743 John made several deeds recorded in Frederick Co., Virginia, conveying portions of this tract to each of his sons, Thomas, Henry, Hurr, and John Jr. Each deed described him as ”John Mills, Sr., of Prince George Co., Maryland, farmer.”

“…was the first Quaker meeting established in the Shenandoah Valley of Virginia. It was originally known as Opeckan and was set off from the Concord Quarterly Meeting of Pennsylvania in 1734. The actual date of first settlement is thought to be around 1730. The meetinghouse is located about six miles north of Winchester, Frederick Co., Virginia. 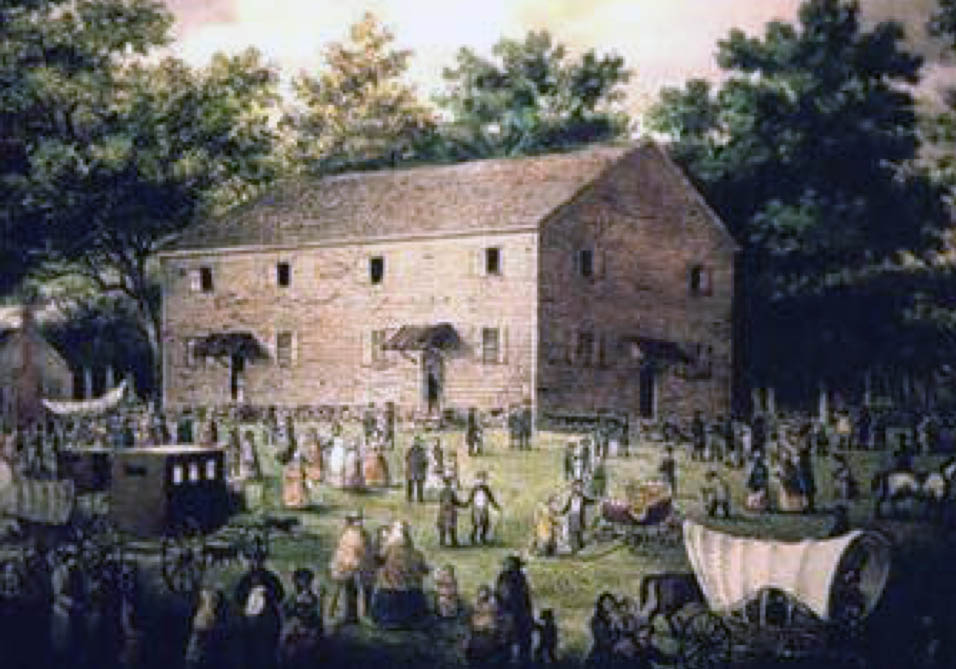 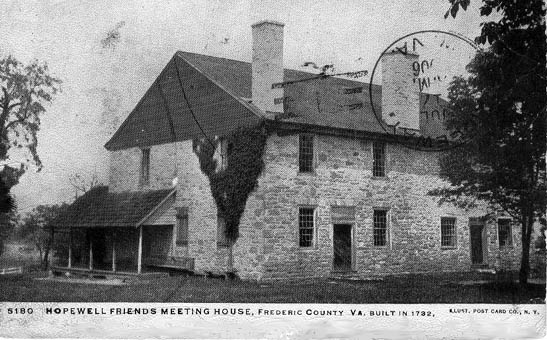 John Mills and son John, Jr., are called “Fathers of the Colony” by Hinshaw in writing of Hopewell Monthly Meeting in Virginia. Unfortunately, the early Hopewell records have been lost and we only know of the Mills family move to North Carolina from the minutes of the receiving meeting. Fortunately, as was often the case, children were recorded at New Garden Monthly Meeting even though born in Virginia and it is here that we learn that Rebeckah was the second wife of John and find birth dates for the second set of children. It is also born out by John’s will.

Cheska Wheatley, one of the most prolific researchers of our line of the Mills family, posted the following information in 2001 before she passed away:

“She gives information from son Thomas Mills’ marriage certificate recorded at New Garden Monthly Meeting, Pa. In the right-hand column customarily reserved for parents and close family members is a signature of John Mills followed by that of Rebecca Mills who is held to be his first wife. John Mills is described in 1730 as living on “Manoquisy near ye River Potomack.”

“The New Garden Monthly Meeting records, Guilford Co., NC contain the birth records of John’s children by a woman named Rebecca who is clearly identified as his second wife. Their first child was born in 1742 some twelve years after John’s eldest son by his first wife was married.

“In 1742 and 1743 John Mills of Prince George, Md made several deeds of land to his sons Thomas, Henry, Hur and John J. who were then residents of Opeckan, Frederick Co, Va and no doubt members of Hopewell MM, Va. The records no doubt contain information on the death of the first wife and marriage to the second wife but the records are unavailable due to destruction in a fire.

“In 1759 [28 Sept], John made his will which made bequests of 1 shilling each to his children Thomas, Henry, Hur, John and Mary “by my former wife.” The rest of his estate was left to his wife Rebeckah and her children who were unnamed in the will. John died in 1760 and this will was probated [July] 1761 in Rowan Co., NC that year.”

Abstract of John Mills Sr.’s Will

Nothing is known about the widow Rebeccah other than one written account in 1840 that states she went to Montgomery Co, NC. Her oldest son William was disowned by New Garden MM, NC in 1763 for attending his sister Rebecca’s marriage to a non-Quaker. There is no mention of the remaining children in the Quaker records.

It is possible that few if any of the children of John’s second wife remained, or even never became, Quakers. William was disowned in 1763 by New Garden Monthly Meeting, NC, for attending his sister Rebecca’s marriage to a non-Quaker.

The youngest daughter, Tabitha (1753-1826) married Ebenezer Park in 1772 in Rowan Co., North Carolina. He was a Baptist and eventually became a Baptist minister. And that is how the Mills family line intersects with our Park family line.

*Two of John’s sons married into the Harrold family.

*”The first settlement at New Garden was about 1750. In 1751, a worship meeting was granted by Cane Creek Monthly Meeting. For the next three years the monthly meeting circulated between Cane Creek and New Garden. The settlement must have grown rapidly, for New Garden Monthly Meeting was set up in 1754. It was destined to become the most important meeting in the State, and was the mother of many others. In the first year, 1754, we have settlers coming in from Pennsylvania, from Hopewell and Fairfax meetings in Virginia. During 1755 nine certificates were received, representing Pennsylvania and Virginia only. According to the official minutes, which note all certificates received, there were brought in during the sixteen years, 1754-70, inclusive, eighty-six certificates in all. Of these, forty-five came from Pennsylvania, thirty-five from Virginia, one from Maryland, and four from northeastern North Carolina.

The following websites are not presently active: