A Look at the English Quarter of the Family

Park is the Anglo-Saxon derivation from Pfarrck. In early history it is found spelled Parkman, Purkyns, Parkins, Parkar, Parker, Parkes, Parks, and Parke. In the Domesday Book it is Parck and De Parce.

Edwin H. Park, in his “The Park Record” c. 1902, gives the origin in the English-speaking countries of the name Park from two sources: First–“From a follower of William the Conqueror, who, after the conquest, was rewarded by the king with grants of land in the north of England. He was made Master of the Hunt and placed in charge of the Royal Parks, and granted the title of ‘Baronet’, and afterwards became known as Thomas de Parke.” Major Wm. Park and Col. Richard Park, both companions of the Order of the Bath, are his descendants.

The second source–“Upon the revocation of the Edict of Nantes (1685) the Protestants living in the mountain valleys of southeastern France were, with all other Protestants in France, compelled to flee for their lives (the Huguenots.) The family surname had at that time not become generally adopted, and when the name was adopted it was most commonly that of a place of residence, or trade. These Huguenots from the valleys or ‘Parc’ as it is called in French, adopted that name as a surname. They escaped to England and settled in the north of England, and in Scotland, and the north of Ireland.”

Northumberland was the home of Roger Parke, the immigrant. It is a county of emptiness––moors stretching in uneven, rugged masses. Hexham, with its Abbey and close proximity to Hadrian’s Wall, is today a small, compact market town. 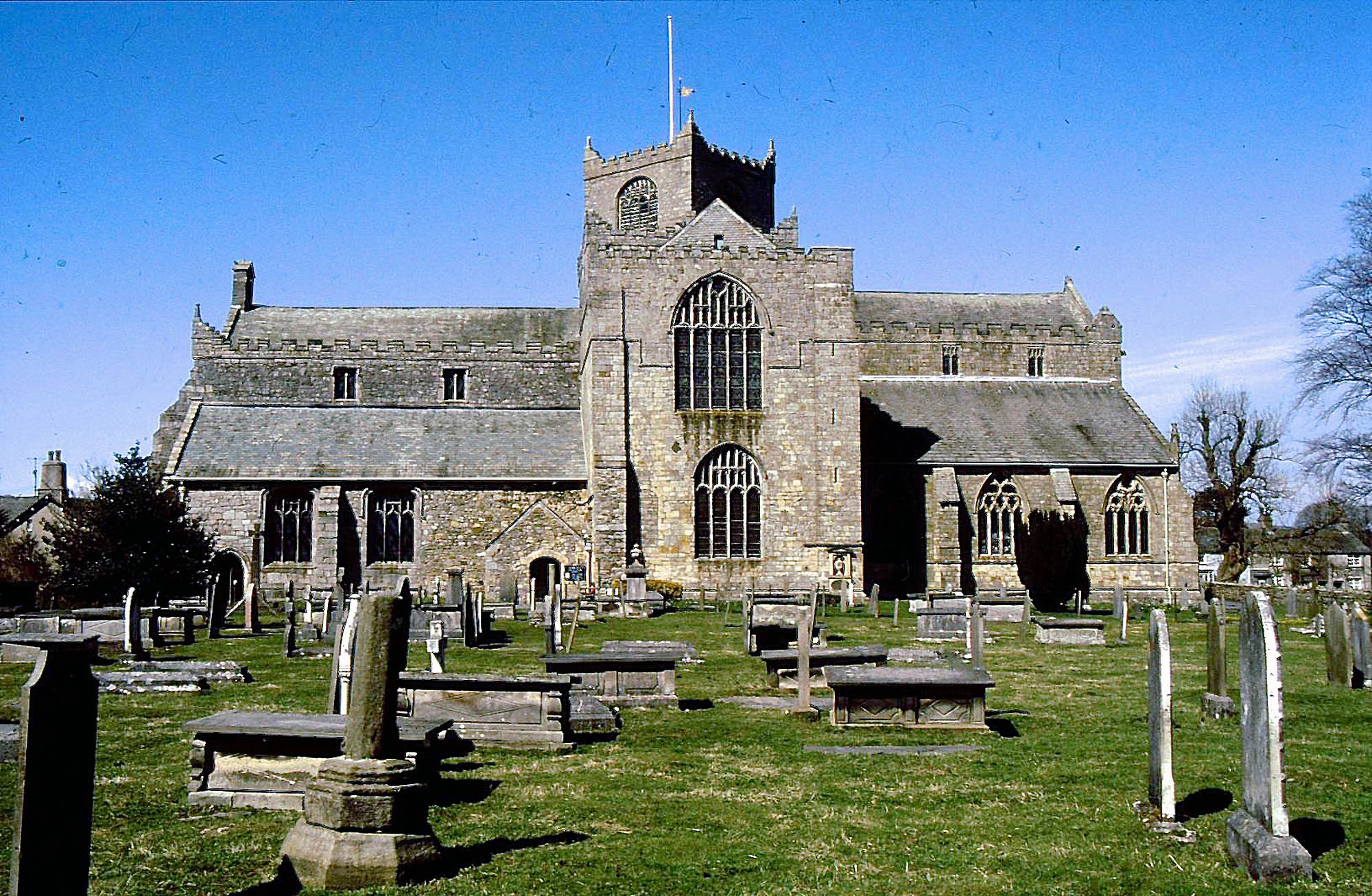 John’s land records start about 1575 according to Cartmel Parish records. He had a wife, Jane Brownrigge, and several children born between 1593-1616.

“The name ‘Cartmel’ is a place-name of Scandinavian origin, meaning ‘sand bank by rocky ground.’ The Village of Cartmel was founded by William Marshall, Earl of Pembroke from 1189 to 1219… The Priory of Cartmel is a very beautiful, old parish church which dates back to medieval English. This place of worship… had once been a monastery until the Dissolution of the Monasteries.

“By the end of 1291, a survey was made of the wealth of the English Church by Pope Nicholas IV. The rectory of Cartmel was assessed at much more than most of the neighboring churches… By 1316, the Scots had defeated the English King Edward at Stirling, finally acquiring their independence. The Scots came over from Richmond ‘lying waste’ to everything as far as Furness and burnt that district, stripping all the goods and taking men and women prisoners. Legions of King Robert Bruce of Scotland plundered the surrounding areas. But when they came to Furness, where the well-to-do abbey lay, the inhabitants bribed the Scots to not burn or plunder the monastery. The Scots set fire to various places and took all that they wanted but left the abbey in good condition.

“June 1487… invaders came to oust Lamber Simnel and to prosecute his claim to the English throne, against Henry VII. There arrived in Furness a great multitude of strangers to form an army. Among the first to join invaders was Sir Thomas Broughton of Broughton. He was named a ‘traitor’ but remained in Broughton where he is buried. The King was soon convinced to pardon all the rebels in the Furness Fels, Cartmel and surrounding areas.

“Perhaps our Roger Park, of Hexham, was descended from one of those invaders brought in to form an army and who settled in the Broughton area, as we do find Allen Parke (father of Roger) born December 15, 1606, Richmond, Broughton (Furness) Cartmel, Lancashire County, England, which later became a part of Cumberland County. “ Later research confirms Allen to be the grandson of Sir John.

The first living child of Allen immigrated with his family to America from Allendale, a village about 10 or 15 miles southwest of Hexham, Northumberland Co., England. His second marriage to Anne Patison was reported at the Carlisle, Cumberland County, England, Quaker Meeting, and at the Alandaile (now spelled Allendale), England, Quaker Meeting. No record has been found of his first wife, who was probably the mother of John and Roger, Jr. Daughter Anne may have been Anne Patison’s daughter, but even that is uncertain.

Roger immigrated to America in 1682 and located at Crosswickes, New Jersey not far from Trenton. This was the same year that William Penn founded the colony of Pennsylvania with a shipload of Quakers from England.

Roger Parke was an active Quaker, or member of the Society of Friends, during at least the middle part of his life as shown by various records… In 1676, Roger married for the second time: “Roger Parke, formerly of Cumberland, married Anne Pattison at Taylorbourne, Allendaile, Northumberland, England, 2nd month, x day (April 10), 1767.” This information is set forth in the Digest of Quaker Marriages for Cumberland and Northumberland Counties, England. The original marriage is reported in the records of the Holme Monthly Meetings, Book 355, page 268, filed in the Cumbria Record Office, The Castle, Cumbria, United Kingdom.”
By 1696 Roger had become disenchanted with the Quakers due to the controversy over doctrine between George Fox and George Keith; as a result he left the Quaker faith. Roger, together with other relatives and friends, moved to Hopewell in the northeast corner of Burlington County, New Jersey and joined the Episcopal Church. Since the Quaker movement started in 1648, it is likely he was born into the Episcopal Church (Church of England) and found it easy to revert to it. The Park family is said to have owned about 1000 acres of land from Hopewell north, opposite the Indian village called Winnemenson.

For more than thirty years Roger and his son Roger, Jr. lived on and improved the land they had purchased from the West Jersey Society and their agent Thomas Revell. When a Dr. Daniel Cox arrived from England with a Land Grant for 30,000 acres of land that included Park land and land of at least fifty others, they all signed a Letter of Protest to Eviction. They lost in the British court and were ejected. By then Roger Parke, Sr. had died. Roger, Jr. managed to get enough money together to buy his house and a small acreage and remained there until his death.

“Over three hundred years ago Dr. Roger Parke of Crosswicks, Burlington Co., NJ… purchased a tract of land described as ‘400 acres at Wissamenson on the north side of and along Stoney Brook,’ part of the Quaker Society’s 30,000 acre tract along the Delaware, dated April 1697.”

“It is this 400 acres of land that was challenged in the ‘Eviction Suit of 1735’, in which Roger Parke and his sons, were told to pay for their land again or vacate the premises.

“In the end, Roger lost 600 acres during the Eviction Suit, leaving him with 200, the exact location was described as: ‘The Nucleus of Roger Parke’s farmstead was sited on the south-facing slope of the head of the gap through which Stoney Brook runs after draining Sourland Mountain.’ ”

From there the Park families traveled in 1750 to Virginia, first to Fairfax County and then to Capon Valley, Hampshire County.
There are two theories of Roger Parke and the following two generations posited by the Park Society. These two theories are just that, not to be taken as based on positive fact.

“Since the cemetery and burial site of Roger Parke was on his farm and not separately deeded as a cemetery, it was unprotected from development and the cemetery was recently lost.”  (Park Society Newsletter)