How great-grandchildren recovered a part of their collective history 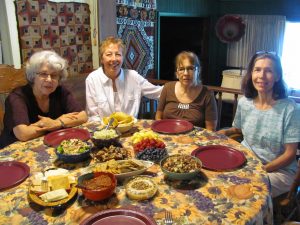 First on the schedule was a delicious lunch served by Justine Detweiler Trout. 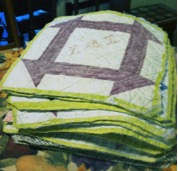 A part of each year’s discussion was “what to do with Grandma Schrock’s quilt.” We studied the various blocks, intrigued with who these women were that contributed their signed blocks. There they were on the table for us to fuss over!

On this particular occasion, before leaving we all traipsed outside to see the original cactus John Schrock began growing after knocking its “mother” over while painting a neighbor’s house. Babies from that cactus have spread far and wide with members of his Schrock family. The older-looking cactus in the center is the original, surrounded by progeny. Justine, and her mother Alta before her, lovingly care for these cacti, many of them blooming year after year. I have several cacti living with me. 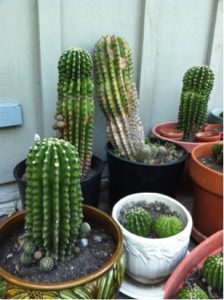 But back to the quilt. Following is Mary Cender Miller’s description of the details that went into the project. 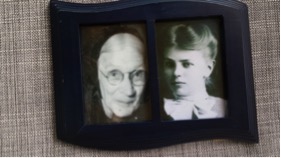 In 1903, Mary Schrock (1862-1954) commissioned a friendship quilt among her friends and relatives in the East Bend Mennonite Church community near Fisher, Illinois for her teenage daughter, Fannie’s (1889-1950) 16th birthday. Each of Mary’s chosen acquaintances was asked to submit a quilt block in the Churn Dash design and were to embroider their name in the center of the churn. Eighteen women submitted signature blocks. Two of them included the 1903 date, while Mary signed herself as “Mother,” adding weight to the quilt’s provenance.

Further, in the 1980s, Justine Trout found this quilt in the room where her great-grandmother Schrock had spent the last days of her life; found it under the weight of bedding, mattress, and bedspring. It was frayed and considerably faded. Justine cut the quilt into its signed block squares, intending to distribute them as mementos among the descendants of the women who had embroidered their names in the churns more than a century before.

Much excitement was generated at the sight of these blocks on the part of Fannie Heiser’s various granddaughters, great-granddaughters, and great-great-granddaughters. True, on the one hand, the embroidery on the quilt blocks appeared worn and inconsistent. Moreover, on various solid yellow blocks, dye pigment was actually separating and fragmenting on the surface of the fabric. On the other hand, the quilter of these blocks—and it was obvious that one person had done the whole piece—the quilter had sewed eight, sometimes nine stitches to the inch, a remarkable hand-quilting feat.

Various voices among Mary’s admiring female descendants urged keeping together the cluster of nostalgic signature blocks with the excellent quilting stitches. In 2015, I (Mary Alene Cender Miller, Mary’s great-granddaughter namesake) re-assembled the quilt blocks en pointe, using sixteen blocks in rows of four. On the quilt backing, for posterity, I aligned scraps of original yellow fabric and the disintegrating sashing. From time to time, at family gatherings and parties, Fannie’s granddaughters, great-granddaughters, and great-niece, Donna Schrock Birkey, gathered and gave helpful counsel and encouragement for this project.

Particularly, in October 2015, a group of Mary’s descendants by blood or marriage made a pilgrimage to Arthur, Illinois Amish fabric stores to hunt for quilt backing that would emulate the small black-and-white-checked fabric used in the quilt’s first construction. Annette Williams, Kathryn Martin, Terry Laho Cender, Justine Trout, and I went from store to store, dragging down bolts of fabric and laying the re-constructed quilt top against them. Finally, Annette discovered the small brown check with dabs of green that everyone agreed was the satisfactory match.

Using resources from the 1915 Peter Zehr East Bend Church Membership Record, Alta Detweiler’s writings and compilations, and Donna Birkey’s website, Mary’s great-granddaughter Kathryn Martin compiled copious notes on the identities and backgrounds of the quilt block autographs. Justine Trout and Donna Birkey also added their genealogical expertise to this list. Thanks to these efforts, 113 years after the signatures were first embroidered we have a fairly clear sense of the identities of the women whose needles pierced the cotton of the dashing churns in central Illinois. A few of us are of the generation who can even recall interacting with some of these relatives and friends who responded to Mary Schrock’s vision for a friendship quilt for her daughter, Fannie’s, 16th birthday.

Block signature identities, some tentative, for the friendship quilt for Fannie Schrock, who married J. A. Heiser in 1909.

It is ironic to have a quilt full of signatures, but not that of Mary Schrock. We are left to be grateful that word of mouth—Fannie to Alta to Justine—establishes the provenance of the quilt signed “Mother,” found in Mary’s last bedroom. 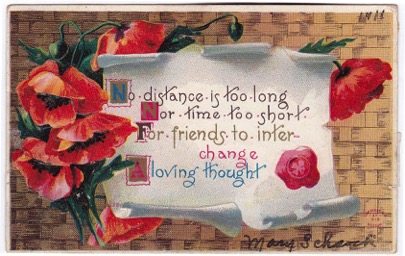 Signature of Mary Birky Schrock in 1911

Putative samples of Mary’s handwriting are available. In 1911, she sent a postcard with a penciled message to her friend, (five years her senior) Barbara Heiser Zehr, signing her name “Mary Schrock.” Later, perhaps sometime after Barbara’s death in 1934, the card was returned to Mary and at that time on the front, she inked her name and the 1911 date. By her late fifties, Mary had eight grandchildren and often signed herself “Grandma Schrock,” and so she remained for the next thirty years in her church and her circle of friends, as well as “Grandma Schrock” to the great-grandchildren who remember her today.

May 27, 2016 – Reconstruction and Preservation: Revealed and Displayed 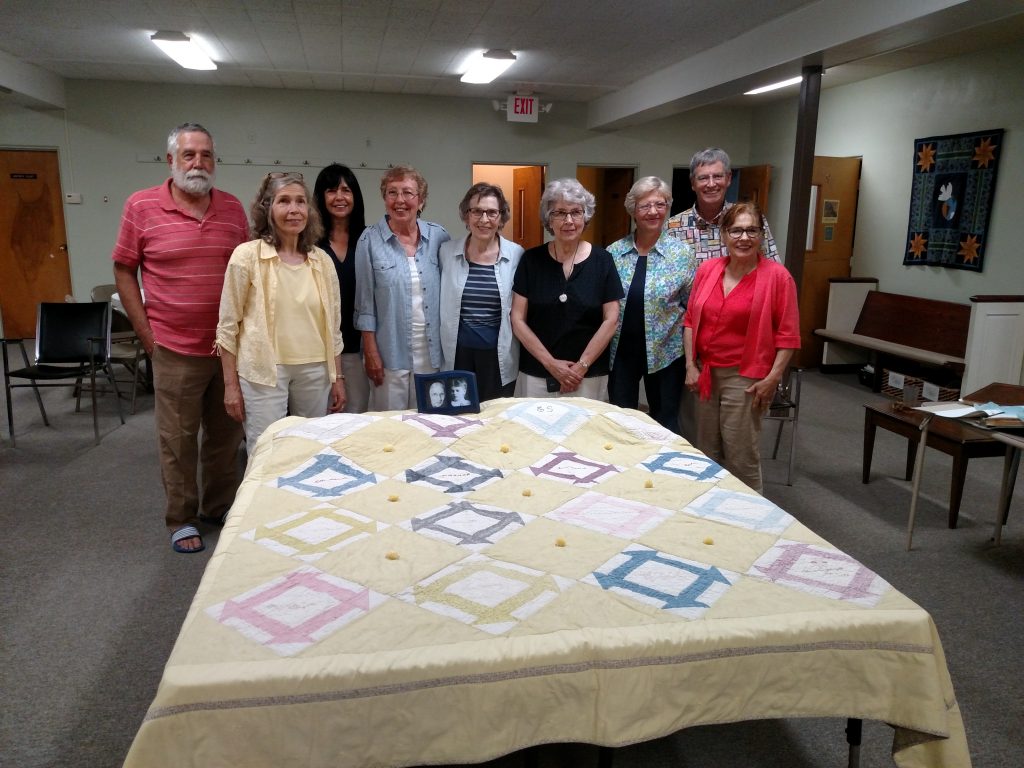 On a Friday afternoon in May, at the First Mennonite Church of Champaign-Urbana, the restored friendship quilt became the point of attraction for at least 35 interested family members and friends. Other quilts made by Mary Birky Schrock were displayed, as well as other of her many craft items: a painted pillow; beaded purses, pincushions, and a jewelry/keepsake box. Still more interesting artifacts, among them Fannie’s autograph book, a baby mug and her husband J. A. Heiser’s baby bib were shared, and historical photos, records, and documents examined. 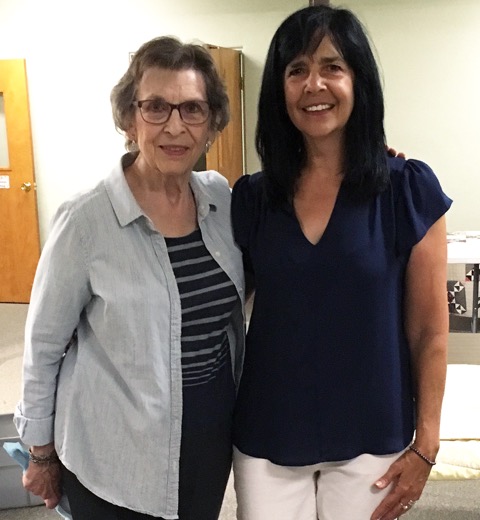 Oldest and youngest of the Great Grandchildren

Fifteen or so of Mary and John’s direct descendants attended, in addition to other “kith and kin” and a handful of friends. Schrock, Heiser, Yordy, Kandel, Birkey, Teuscher, Cender, Detweiler and Good families were represented. As it turned out, John and Mary’s oldest and youngest great-grandchildren were present. While munching on the abundant snacks and drinks provided, the far-flung Schrock relatives reconnected and enjoyed the event that brought them together from Chicago, Eureka, Washington state, Indiana, Alabama, and Pennsylvania to home territory in Central Illinois. 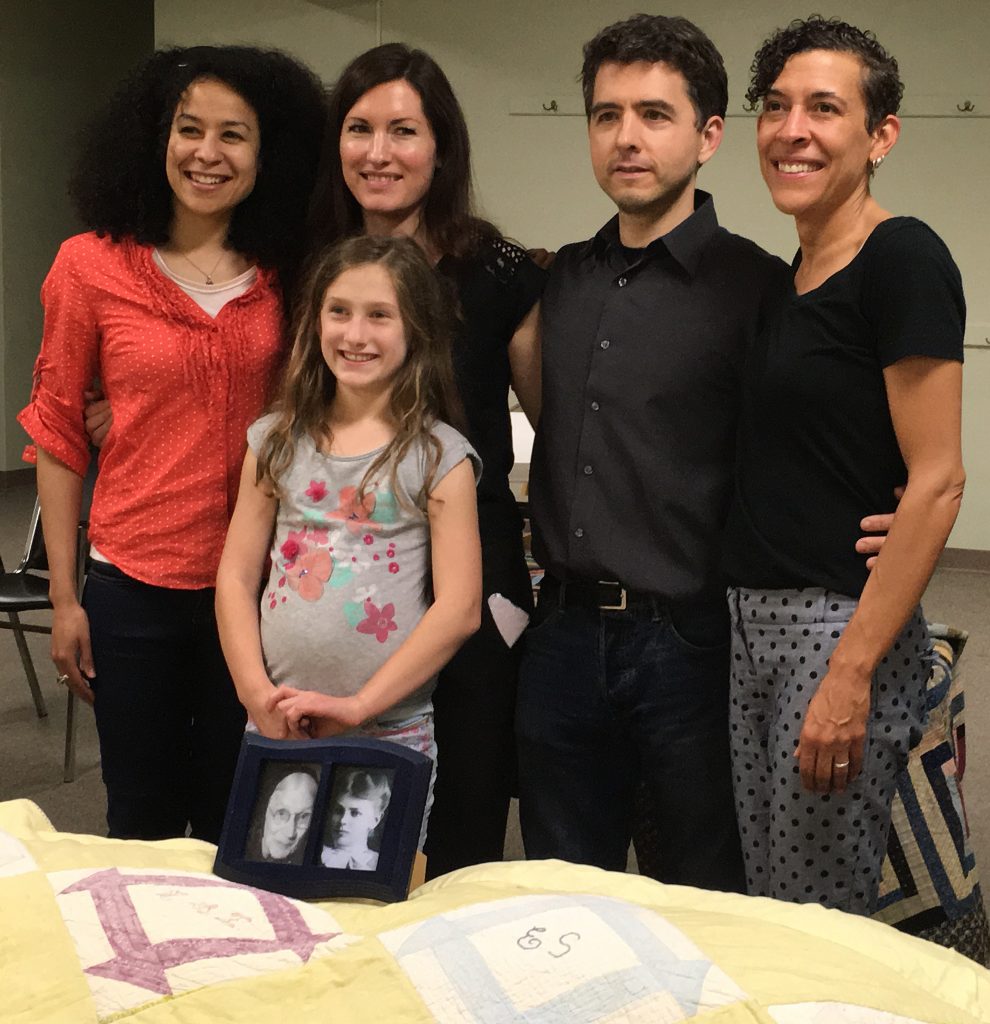