The 100th Anniversary of the Mennonite Home for the Aged prompted an article about Josephine Yordy Schrock to be included in the Spring 2022 issue of Illinois Mennonite Heritage. Written by Frank Kandel and Donna Schrock Birkey (1st cousins and grandchildren of Josephine) it tells the story of Josephine’s life connections, at the beginning and at the end, entwined with that 1922 institution.

An Abstract View… tells the story of two lots of land in Fisher, Illinois, and how they changed owners over 150 plus years, from 1850 until sold in 2008.

Another article by researcher Herbert Holly, originally published in Germany, now debuting on the Schrock-Birkey website. It includes a brief Bircki mention, as well as photos of the three farms (hofs): Kandlerhof, Oswaldhof, and Holzbauernhof.

← Life on the Prairie New Article Posted - An Abstract View →

Life on the Prairie

Life on the prairie was not easy

Read about a Schrock family who “toughed it out” and managed to establish a home for themselves in spite of trying times… sod homes, sickness and death, blizzards, tornadoes, and rattlesnakes.
← A new article about Mennonites near Munich in the early 1830s Mennonite Family Stalter in Gern →

A new article about Mennonites near Munich in the early 1830s

A new article about Mennonites near Munich in the early 1830s

A new article by Herbert Holly has been added to the Articles page, under Related. It gives the story of Mennonites near Munich in the early 1830s, as taken from a document found at Staatsarchiv Munchen. Reported by Heinrich Stalter, head of the Amish Mennonite Congregation of Munich, it describes their church life in great detail. Additional text has been added in the form of footnotes, adding information about some of those named.

← A New Article in Related Families Life on the Prairie →

A New Article in Related Families

A New Article in Related Families

A new article, “The Mennonite Cemetery in Gern,” has been added under the Articles: Related Families section. It tells the story of a long, lost Mennonite cemetery near Munich, Germany being discovered after many years of being hidden and mostly unknown. Thanks to Herbert Holly for sending me the article (in German), and to Sem Sutter for making the Google English translation much, much better. 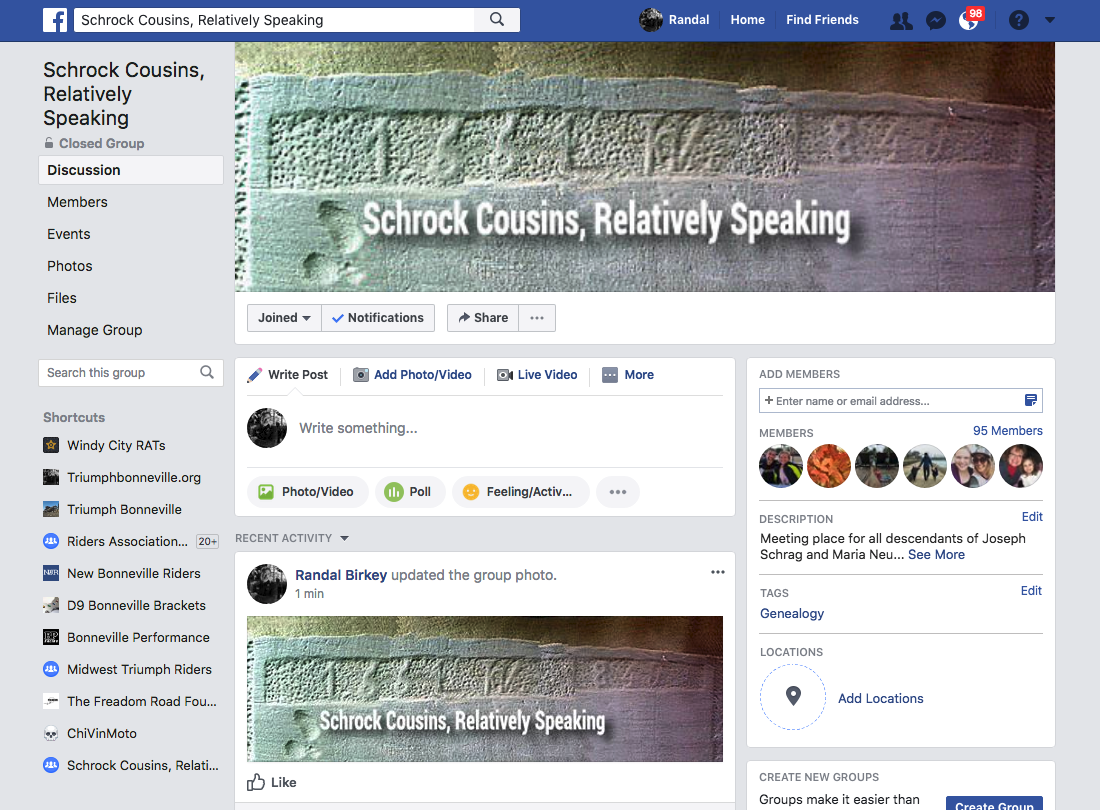 This is the meeting place for all descendants of Joseph Schrag and Maria Neuhauser through their five immigrant children: Johannes, Peter, Andrew, Magdalena (Smith), and Barbara (Belsley). Also welcoming cousins interested in Schrock history back to our roots in Wynigen, Switzerland.

If you are interested in joining this group, please use the "Join Group" button on the Facebook group page, answer a simple question and submit your request. We will respond as quickly as possible.