From England to Illinois

by Donna Schrock Birkey
Originally published in the Illinois Mennonite Heritage Periodical (http://www.imhgs.org)
Volume 1, No. 4, Winter 2018
(Used with permission of the original publisher)

Lord, you have been our refuge from one generation to another….
A thousand years in your sight are like yesterday when it is past….
The span of our life is seventy years, perhaps in strength even eighty….
Teach us to number our days that we may apply our hearts to wisdom….
From Psalm 90

My personal origin could have begun in any one of a number of places across England or America. In any century since 1500, if my Park family had decided over the years to settle in one place and stay put, I could have been born in England, New Jersey or Virginia, Kentucky or Missouri. Instead, I was born and raised in Fisher, Champaign County, Illinois—a result of my mother’s ancestors being on the move for over 400 years.

The Anglo-Saxon Park name in its many forms (Parke/Parks/Parkes) is listed in the Domesday Book as Parck and De Parce. There are two possible sources of the name:
1) from a follower of William the Conqueror, and 2) from the place of residence, or trade—Huguenots from the valleys or ‘Parc’ who adopted it as a surname. Some later escaped to the northern part of England.

Northumberland was home to Roger Parke (1648-1731), a 1682 immigrant to America. His great-grandfather, Sir John Parke, had been born in Yorkshire in 1538. Roger was an active Quaker when he married his wife Anne Pattison on April 10, 1767. 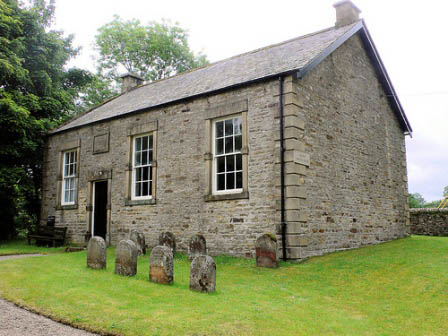 But he became disenchanted due to the controversy over doctrine between George Fox and George Keith, leaving the Quaker faith to join the Episcopal Church (Church of England). He and his family are said to have owned about 1000 acres of land around Hopewell, New Jersey, opposite the Indian village called Winnemenson. The family eventually lost the land in an Eviction Suit, and resettled in Virginia, first in Fairfax County and then to Capon Valley, Hampshire County.

One of his descendants, John Parks, received a 1753 Fairfax land grant in Old Frederick County, Virginia, that was surveyed by 18-year-old George Washington. This is documented in George’s survey books held in the National Archives. It is also thought that another John Parks, probably a son, served as a chairman for George in 1750, helping with the surveying. It is fairly certain the Parks and Washington families were acquainted. Doug Park’s research reveals the land surveyed is today located along the Capon River in Capon Bridge, Hampshire County, West Virginia. 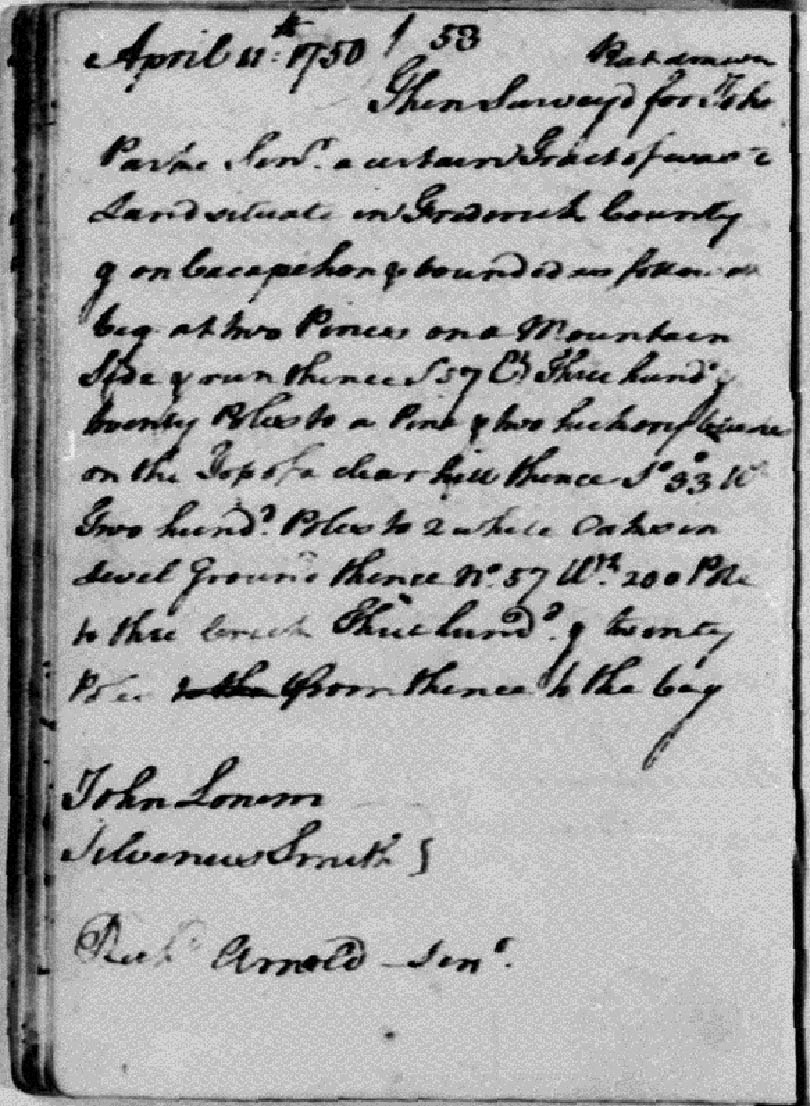 A number of the Park families, including Ebenezer Parke (1747-1839), my 4th great grandfather, “followed Daniel Boone into Kentucky using the “Wilderness Trail” to Madison County about 1795/96. He was a Baptist minister and is considered to be a “Pioneer of Madison County.” His son John farmed and owned slaves; son William was a Calvinist minister who later joined the Christian Church; son Eli was a colonel with eleven children. Eli’s son Jonathan migrated with his family in 1853 to McLean County, Illinois.(1) 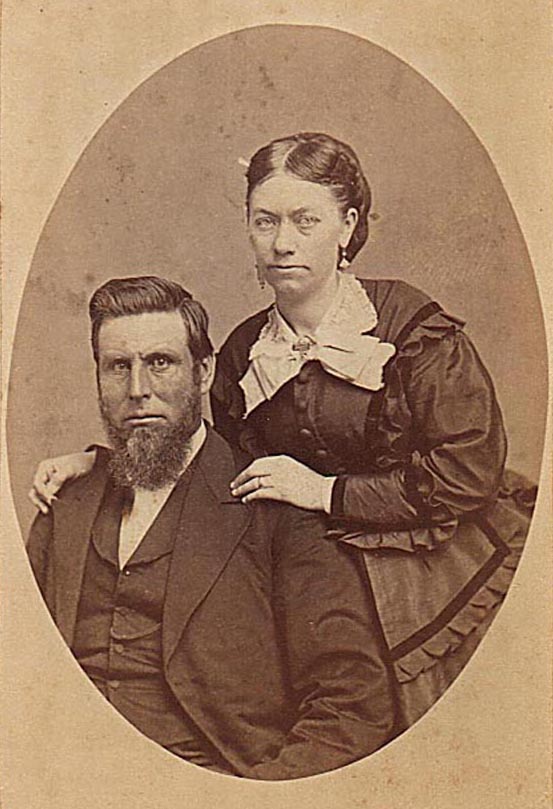 Ebenezer’s son, Jesse, the only one of his family to leave Kentucky, married Winnie Ann Dent, daughter of land and slave owner, Samuel Dent, and followed the Dent family to Missouri where he and Winnie were given land by her father Samuel.

The Missouri Park families lived mostly in Franklin County. Eli Bailey Park (1846-1922), my great-grandfather, was a farmer who fiddled, served in the Civil War and was a member of the Christian Church. His obituary reports that he “cherished the faith and the blessed hope.” In his later years, he lived in Stanton, near the Meramec Caverns. 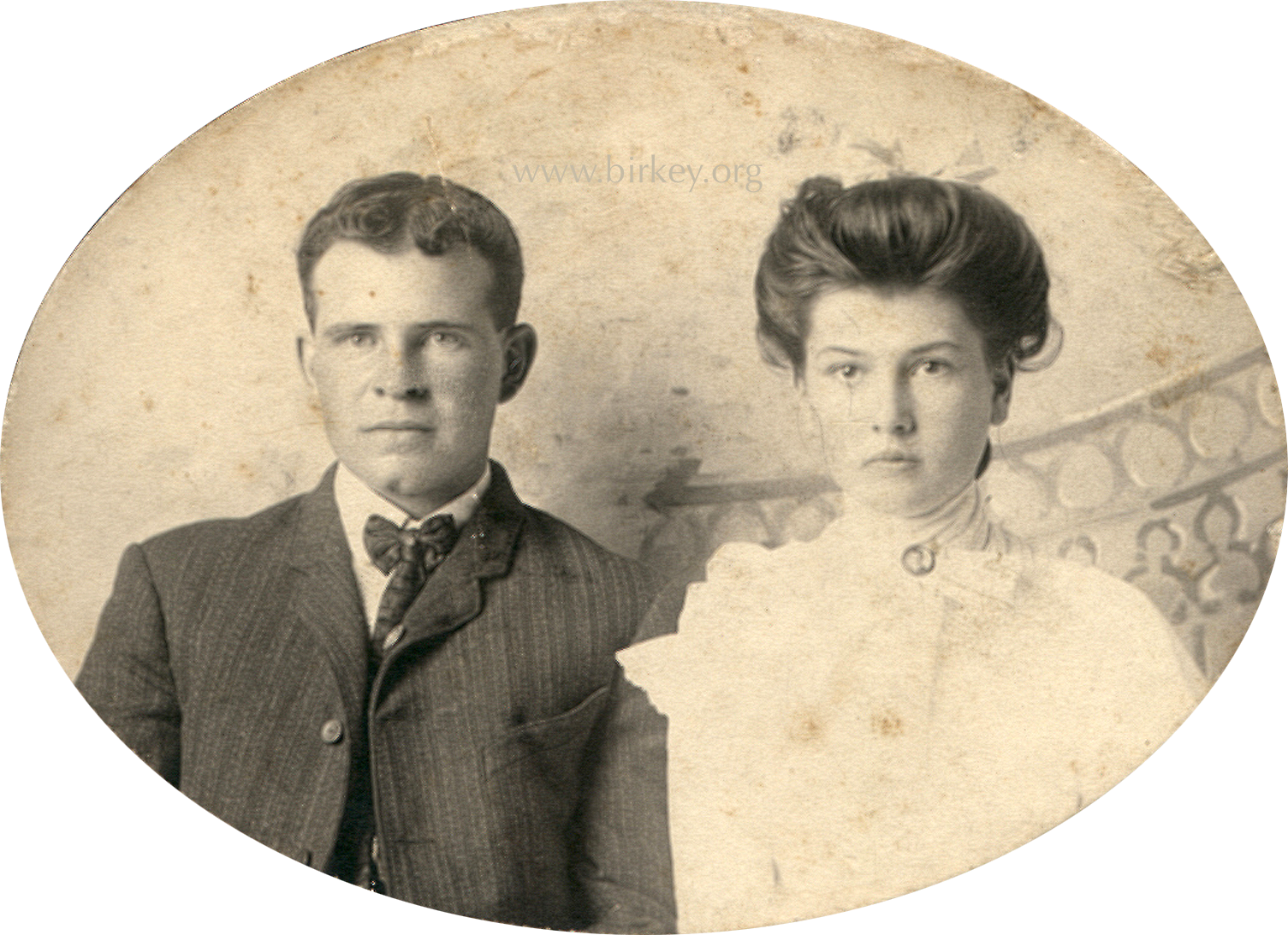 Times were difficult and jobs not plentiful in that part of Missouri, so the family relocated into the southern Illinois communities of Carlyle and Taylor Springs where Grover worked in the coal mines. While there, Grover met a man who knew a farmer from Illinois needing farm laborers.  So it was that around 1919 the family again pulled up stakes and traveled several hundred miles north to the village of Fisher, in Champaign County (a tiny village of fewer than 200 persons in 1880). Grover began his work as a farm hand on the Alvin Sperling farm. Several years later, in 1921, Verna Eileen was born, the fifth child of Grover and Effie. 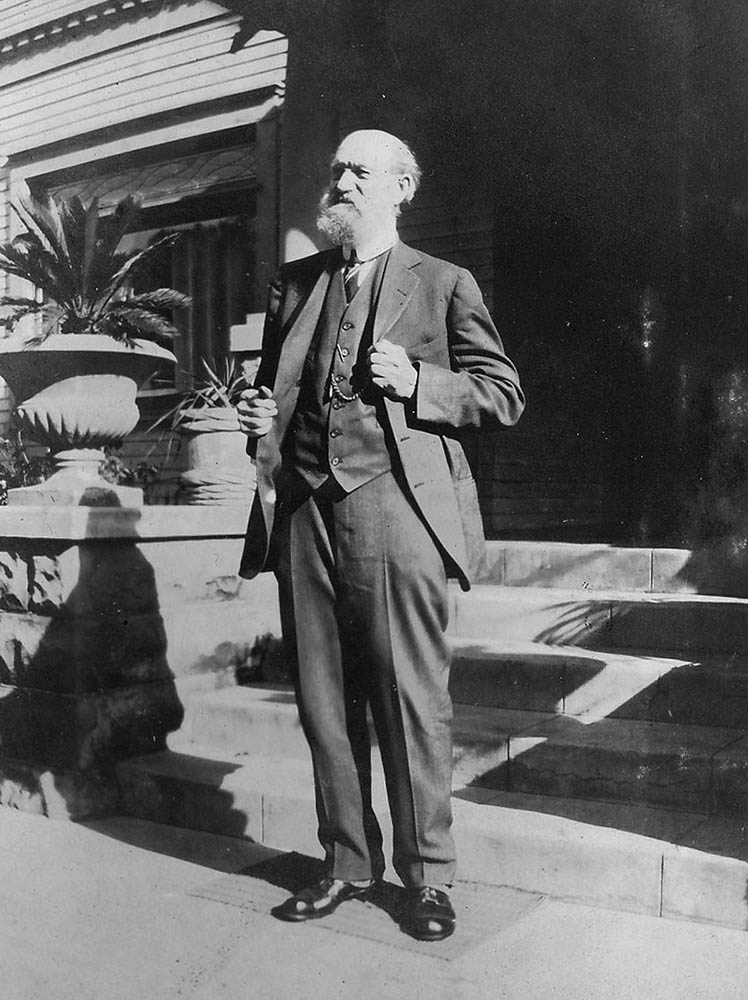 At some point, Grover left the Sperling farm to work for John Teuscher (1875-1935). Park-Teuscher John had moved to Champaign County from the Eureka area in the late 1890s to help form East Bend Mennonite Church. Grover was greatly impressed with and affected by, the life of this family. During part of his employment, the Park family lived in a house on Teuscher land. Grover and at least one of his sons were also workers on the “concrete slab” built from the village of Fisher north, then east to Rt. 47. 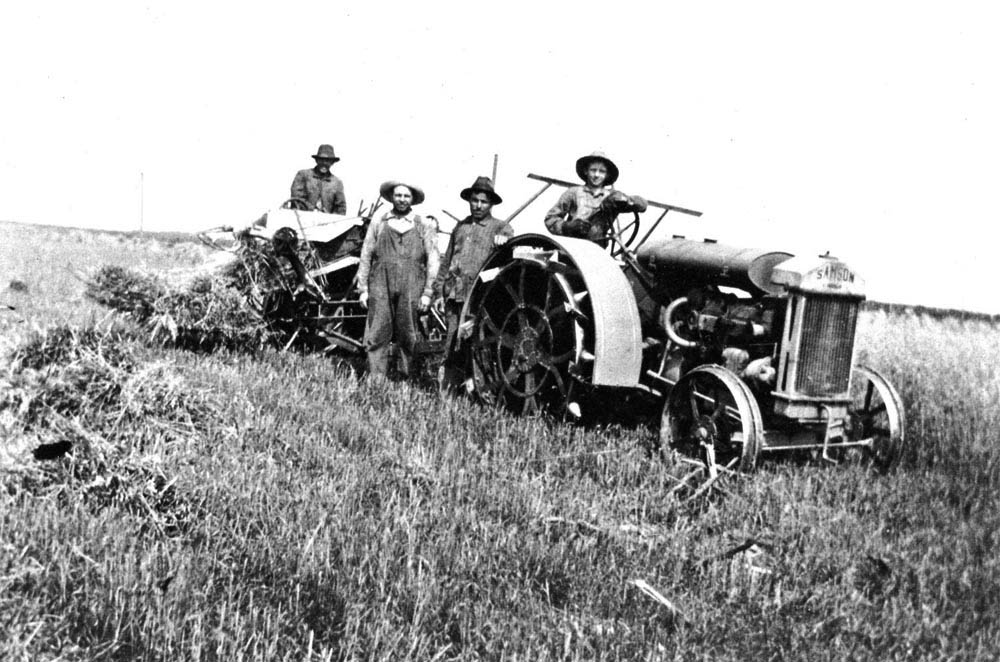 Grover, second from left, working on the John Teuscher farm 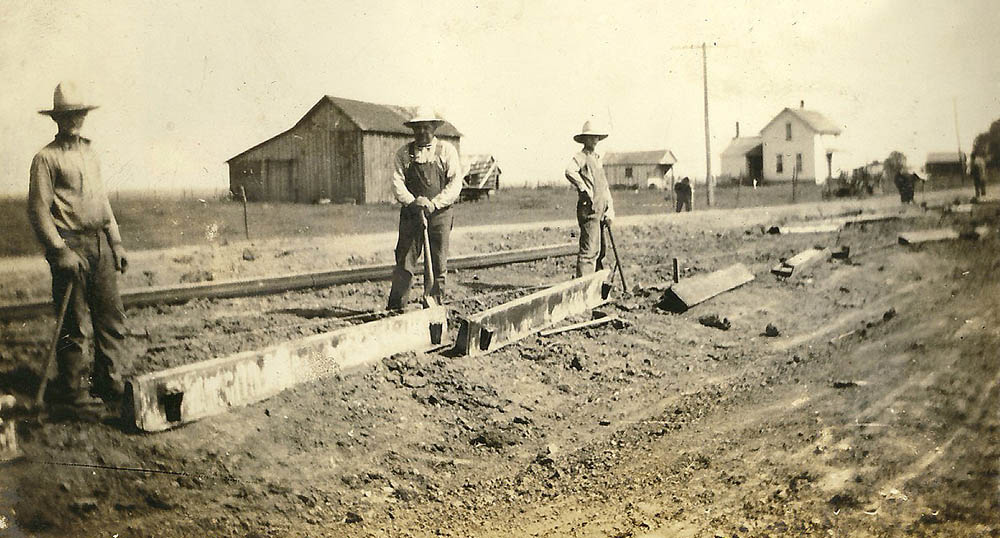 Grover Park, second from left, working with the road crew

The family lived in several other houses over the course of the early Fisher years, including the house south and across the road from the East Bend church. Another house was just west of the church (which remains, updated). While living in the south house, Grover kept quite a few beehives. There were also pet pigeons that would fly with their wild counterparts, but always return to roost in their cages. 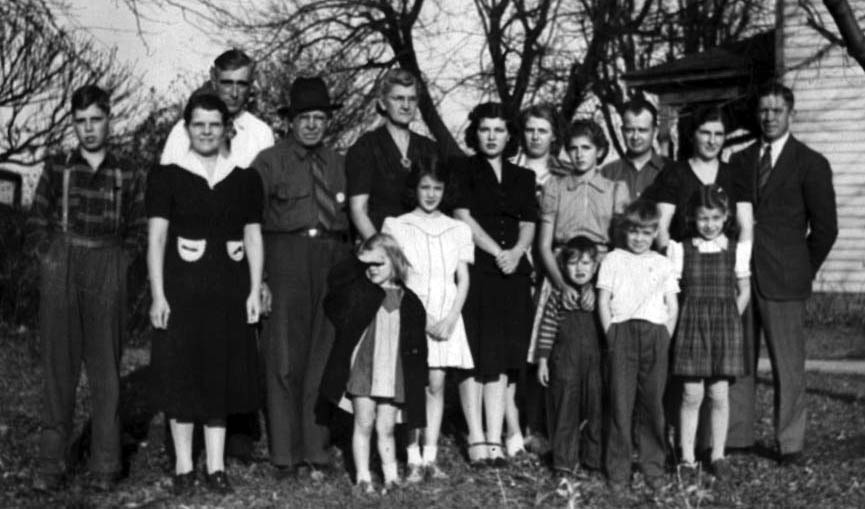 Grover Park family in 1942: Roy and Mamie on the left, Orval and Mae on the right

Quite often on Sunday mornings, the family would walk to the bridge over the Sangamon River just north of the church to hopefully catch some fish for their Sunday dinner. 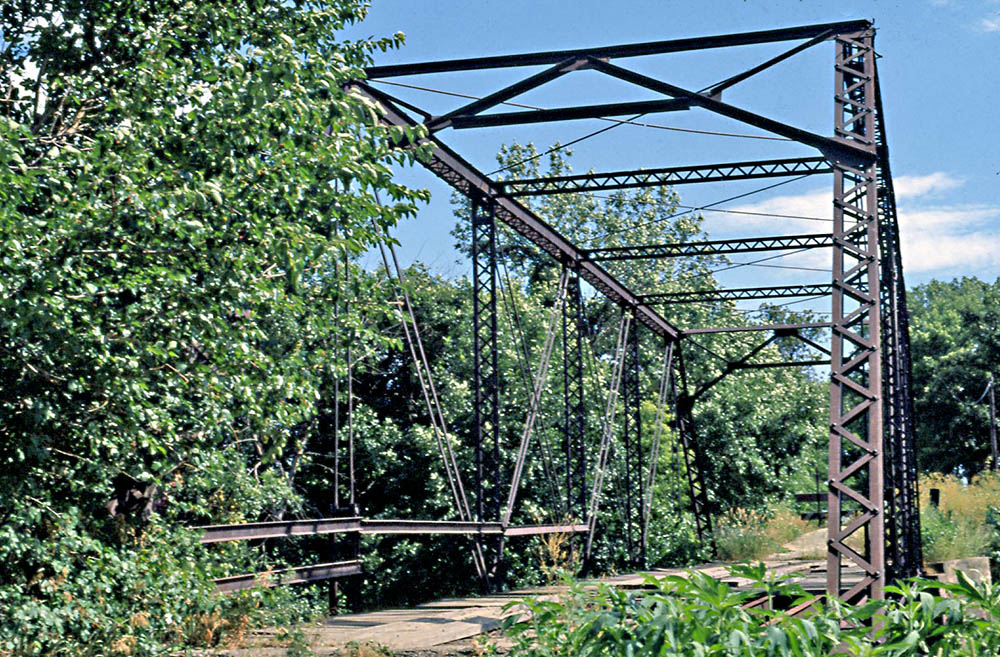 In the summertime the windows of the church were open and the sound of singing in four-part harmony escaped to the family on the bridge. Those sounds and the lives of the church members prompted Grover and Effie and family to become part of the Mennonite community. In January 1921, Grover and Effie were baptized by Andrew Schrock and became members. And, living so close, Grover worked for a time as a custodian at the church. That January decision on the part of Grover and Effie Park resulted in two of their daughters marrying men from the Mennonite community:

Mamie Frances (1907-1980) became friends with Lelia Cender, visiting with her family on Sundays. There, she met Lelia’s brother Roy (1905-1984), children of John and Katie Zehr Cender. After a more lengthy courtship than most other couples, Roy and Mamie were married on 8 September 1927, by J. A. Heiser, in the Park home west of the church. The couple lived most of their married life on a farm north and east of Fisher raising three children.

Mamie and Roy were active in Christian ministries during their lives, both within their local Mennonite church and elsewhere, for some time ministering to Chanute Air Force servicemen through the Servicemen’s Center in Rantoul during WWII. 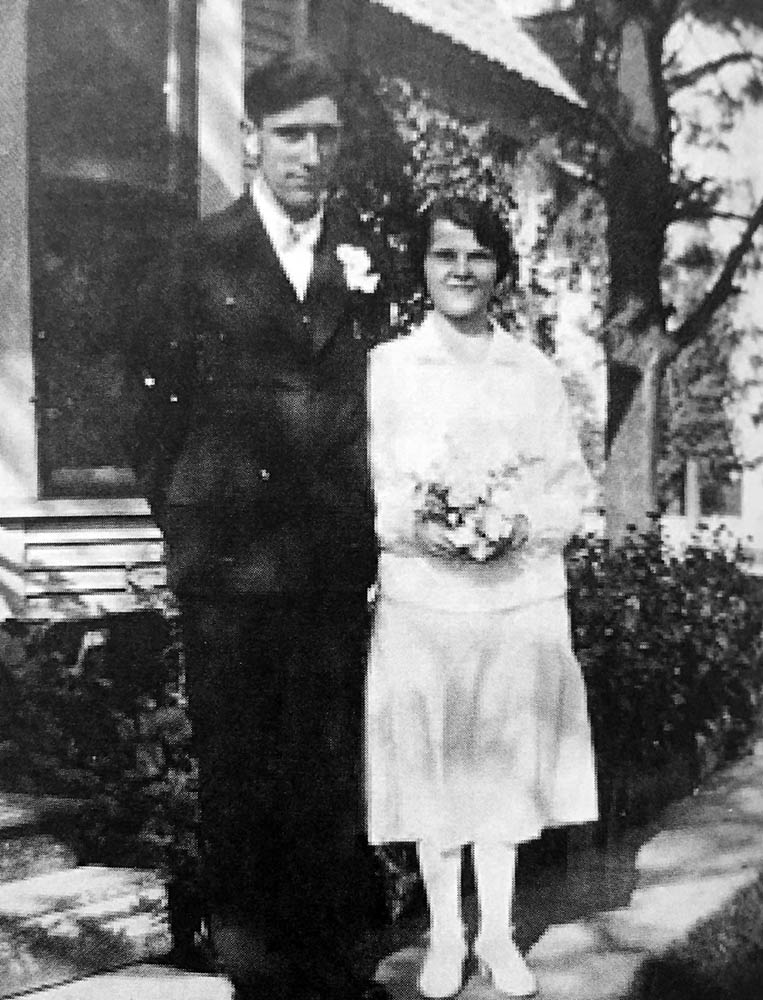 Laura Mae (1912-2009) was a self-described “tomboy,” following along outside in overalls with her two brothers, climbing trees, always active. She went on to graduate from Fisher High School and was always proud to be the fastest typist in her class. She later put that expertise to good use as a civil service employee at Chanute Air Force Base for many years.

As a result of the Park family’s relationship with the Heisers and Schrocks living about a mile away, and the regular interaction of church young people, Laura Mae (or Mae, as she was later known) caught the eye of Orval Schrock (1910-2002), my father. 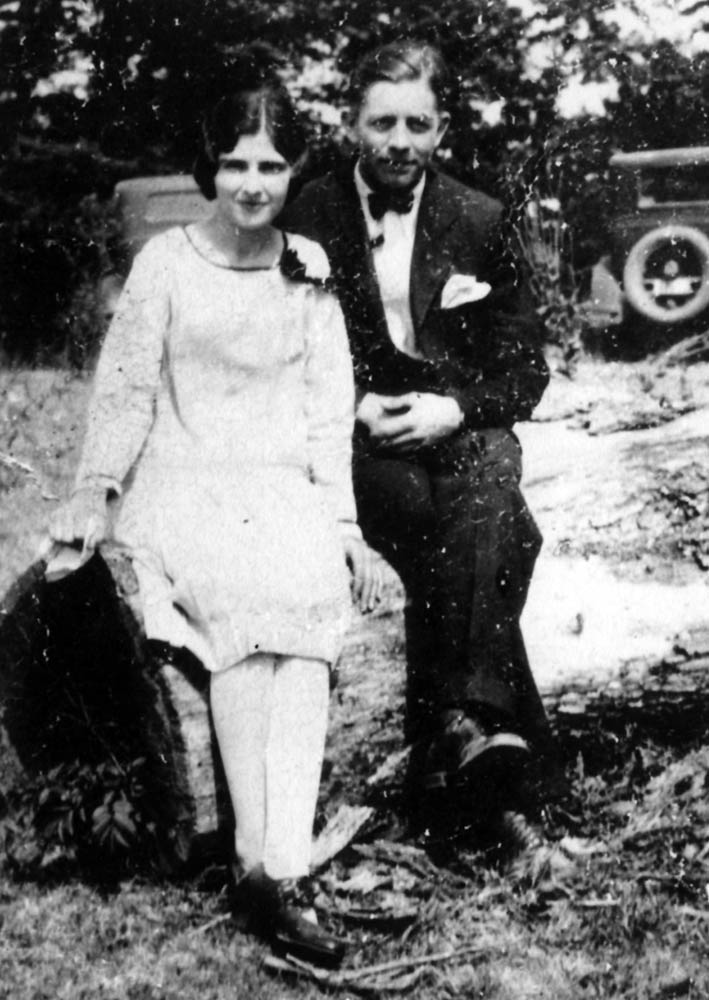 Orval Schrock and his wife Laura Mae Park about 1930

Orval was the son of Josephine Yordy Schrock and her late husband Albert Schrock. Orval was a competitive, fun-loving young man, who had taken over the farm work after his father’s death from tuberculosis in 1917; thus ended his education at only eight grades. Orval’s work over the ensuing years ranged from farming and oil delivery service to a fertilizer business and truck testing lanes.

A year before marriage, Orval and Mae drove with another couple to a conference for Mennonite young people held in Morton. They were hit broadside by another car and both ended in the hospital with several broken bones. They were put into casts from the waist down and were bedridden for about two and one-half months. They kept in touch by sending letters back and forth with visiting friends and relatives. About this same time, Mae’s mother Effie Park was bedridden with tuberculosis. 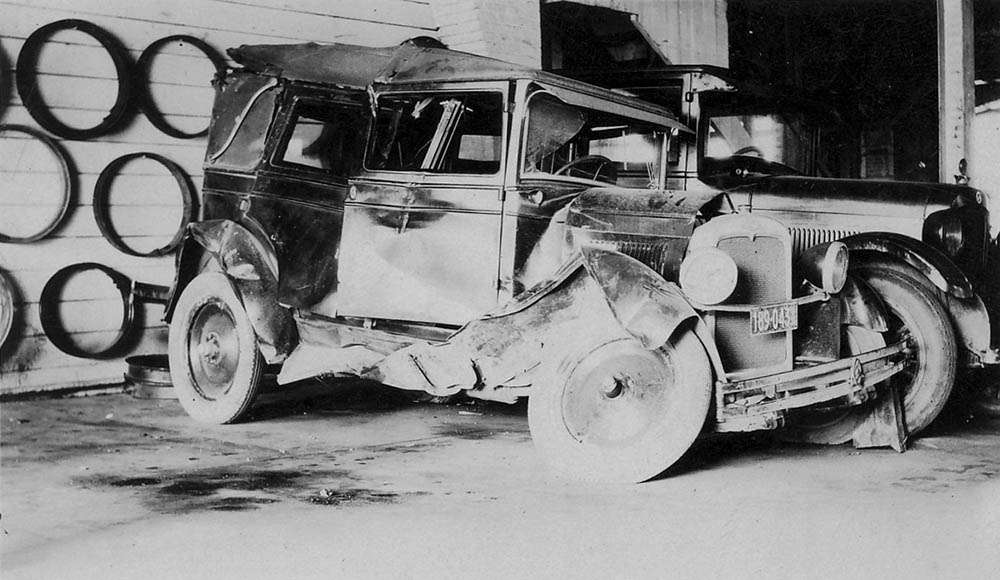 Finally, on Christmas Eve 1931, in the same house as her sister Mamie was married, Laura Mae was wed to Orval Schrock by his uncle, J.A. Heiser. After a wedding trip to Missouri to visit Park relatives, accompanied by brother Roy Park and friend Melvin Grieser who helped pay for the gas, they began their married life in Josephine’s house.  With no electric lights and no furnace, in really cold weather the water in the bucket on the kitchen workbench froze over during the night. In 1934, the couple purchased a small house in Fisher near the school. They would raise two daughters and live in that house the rest of their lives—70 years. 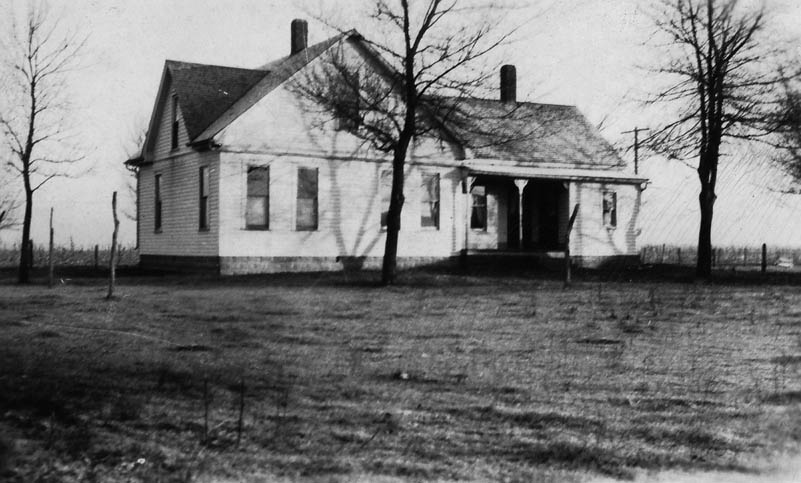 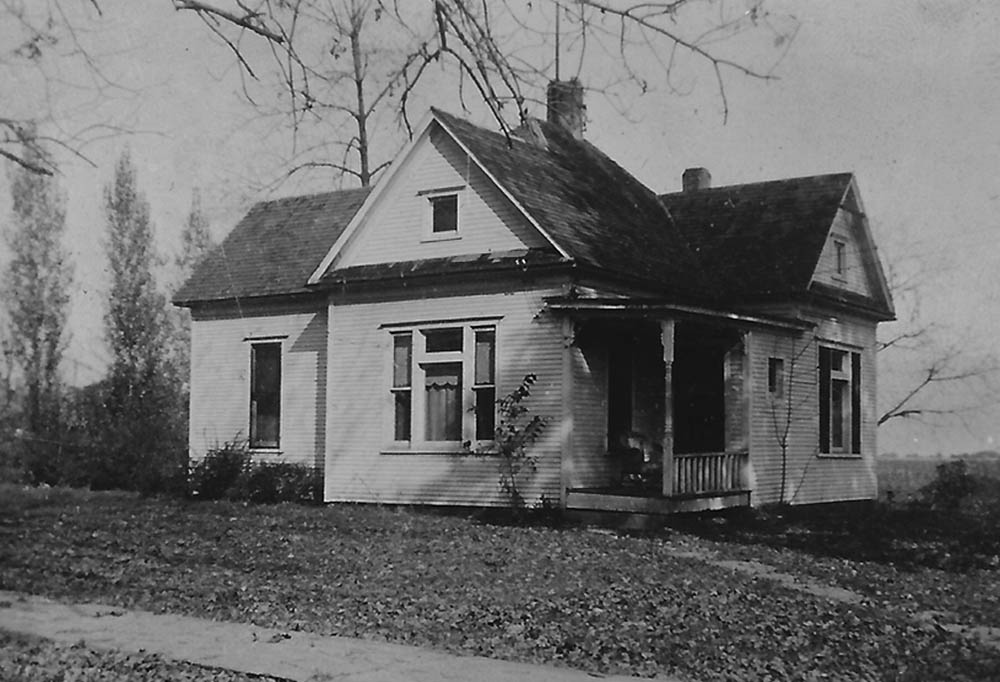 The passage of time and generational migrations bring changes that we sometimes only understand by looking backward to see where we have been, and how we have gotten to where we are now. My Park family began in England as Quaker dissidents from the Church of England. Over the years and throughout their migrations, some became Episcopalians or Baptists, and others joined the Christian Church. There were those who fought in the Civil War and/or owned slaves.

Eventually, however, a change of location in the 1900s brought one Park family to embrace an Anabaptist Christian community, resulting in a different path forward for two members of that family and some of their descendants. Not often in those days did a non-Mennonite, English family integrate into a German Anabaptist community. But through the years and within each generation, God in his wisdom has seen fit to bring about his purpose for each individual who seeks to follow in his footsteps.

1 – Jonathan migrated from Kentucky to McLean County in 1853 with his wife Barbara Quinn and six children, recorded in Portrait and Biographical Album of McLean County, Ill.: (Chicago: Chapman Brothers, 1887), p. 246-7. Later, the Pantagraph newspaper cited Jonathan Park as “a farmer living north of Shirley, was selected as the first minister of the Christian Church in 1859.” He had been ordained in 1852. Interestingly, Homer Park, husband of Myrna Slagell Park, was a great, great, grandson of Ebenezer through his son Eli and grandson Jonathan. Jonathan was also Justice of the Peace, and served commissions as Captain and Major in the Kentucky State militia. As far as I know, my grandfather Grover Park never discovered he had distant cousins living so close by.

2 – I’ve heard, but have not been able to find information, about the Summerville, Illinois Mennonite community—dates it was active, etc., but it is only 20-30 miles from Carlyle. Is it possible that someone from that group also worked in the mines and might have given Grover the information about work available in the Fisher area? Otherwise, how likely is it that anyone in southern Illinois would know details about work available in the small village of Fisher several hundred miles to the north?