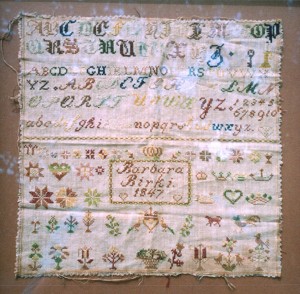 A 10″ x 10″ unframed piece of embroidered linen fabric almost disappeared into “auction oblivion” recently in Pennsylvania. After being taken from Illinois to Pennsylvania sometime during the last six or seven years and languishing in a drawer until the end of 2002, this unique piece of cloth was prepared for auction by Priscilla and Katie, daughters of Ronald and Martha Stalter. Attending the auction was Cindy Grill, whose son, Josh, was to be married to Jessica Mendez, granddaughter of Ronald and Martha. Cindy is a collector of textiles and the cloth immediately caught her attention. It was a sampler with the name Barbara Birki and the year 1847 embroidered in colorful threads. She asked the Stalter family about the sampler and was told they didn’t know anything, except there were Birkys on Ron’s side of the family, so it must have come from them. It was in his lot when the belongings of his parents, Lee and Ruth Stalter, were divided among their children. Lee and Ruth had lived in Illinois, Cindy was told.

Once the sampler was rescued from the auction block, and since it was customary for needle workers to embroider their own name and the date on their samplers, Cindy naturally wanted to know more about Barbara Birki. She found no such name in Pennsylvania, but eventually came across the name on Canadian Don Kauffman’s Stalter website, and found it did have an Illinois connection. Don referred Cindy to Donna Birkey in Illinois, who had supplied him with information about his great-great grandmother, Barbara Birki. Barbara is a sister to two of Donna’s direct ancestors. Now there were two more people excited about the “found and rescued” sampler.

Barbara’s story begins with her father Christian Birki (Birky) of Kirshstackach, Bavaria, born in 1788, and buried in Tazewell Co., IL, with his second wife. He was of the ‘Big’ Birky family (in Illinois called the Sutter Birkys), and lived first in Odenstockah, then moved to Neukirchstock, near Munich, Germany. Barbara’s mother, Christian’s first wife, died leaving him with nine children. Since he had been thinking about immigrating, Christian advertised for a wife willing to be a mother to nine children and go with them to America. Elizabeth Stalter, daughter of Heinrich and Jacobine Stalter, accepted the challenge.

According to Hermann Guth’s research, at 62 years of age Christian applied to immigrate to Illinois on 13 Mar 1851, with his second wife Elizabeth Stalter, age 37. He had 10,000 fl of assets and his wife had an additional 2,225 fl. This was much more than most immigrants had. Traveling with them were Andreas 29, Anna 28, Elizabeth 23, Katharina 17, Veronika 15, born to his first wife, and, Jakobine 5, Heinrich 4, Jakob 3, and Helena 6 mo. born to his second wife. Christian noted to authorities that several older children were already in America.

At the time of his immigration Christian’s daughter, Barbara, was already in America. In 1849 Christian had given approval for Barbara to travel with his brother, Valentine. Guth tells us the immigration document reveals the following information: Barbara Birki, from Kirchstockach (unmarried, but with a child, Jacob, whose father was named as Thomas Luiderer from Putzbrunn) applied on 29 Feb 1849 for permission to immigrate to Illinois. Her father had given approval because she was to travel with his brother, Valentine Birki from Gern, who was the child’s guardian. The document indicated that three brothers/sisters were already in America. Barbara and her Uncle Valentine planned to travel via Mannheim-Le Havre-New York with ship agent Karl Dick from Augsburg. However, it was the ship list of the Minnesota, sailing from Liverpool, England to New York in 1849 that included Valentine Birki (b.1794), niece Barbara and her illegitimate son (we suppose the sampler she had stitched in 1847 was tucked into her trunk), Valentine’s daughter, Mary Burkey Birky (b.1833); and Daniel Zehr.

Since Barbara came to America with her Uncle Valentine and was listed as unmarried, it could be assumed that her marriage to Jacob Stalter took place after arriving in America and that her son Jacob took the Stalter name. However, this conflicts with Stalter information given to Don Kauffman, which claims they were married in Germany before coming to America. Jacob’s obituary gives their marriage date as 30 April 1849, as does a notation in his family Bible. However, Jacob is not listed as a passenger on the Minnesota arriving 21 June 1849. No doubt these incongruities will remain until the marriage document is found, either in Germany or the U.S. Sometime after their arrival in America Barbara and Jacob settled and lived in Livingston Co., IL. Jacob is buried in Waldo Cemetery and Barbara in Hopedale Cemetery. They had twelve children, one being Christian (1868-1953), the father of Levi (Lee) and grandfather of Ronald, who took the sampler to his home in Pennsylvania. This offers fairly substantial proof that the sampler was indeed stitched by Barbara Birki who married Jacob Stalter.

After 156 years, from Bavaria to Illinois to Pennsylvania, Barbara’s sampler will find a new home with Jessica and Josh Grill. Others of us (and there are many in Illinois, and in Alberta, Canada) who have a connection to the sampler will enjoy knowing that it is safe in family hands after evading “auction oblivion.”

a. The Jacob and Barbara (Birki) Stalter Family – Ownership of the sampler must have passed from Barbara to her youngest son Christian – in Illinois:
Jacob N. Stalter b. 12 Sep 1823, born in Germany, oldest child of Jacob and Katherine Stalter–perhaps at Hemerton in Bavaria since his next sibling, Catherine, was born there; d. 8 Jun 1898 Livingston Co., IL. of palsey; buried Waldo Cemetery, Flanagan, IL.; He was a member of the Amish Church and stood in high esteem. Those speaking at his funeral were Christian Zimmerman, Stephen Stahly, Chr. Zimmerman, John P. Schmitt and Joseph Kinsinger. Father: Jakob Stalter (1798-1864); Mother: Katherine (1800-1847) Marriage: 30 Apr 1849, Germany; m. Barbara Birky b. 1824 Germany d. 31 Mar 1885, IL. Buried, Hopedale Cemetery, Hopedale, IL. Father: Christian Birki (1788-1866) Mother: Unknown.

The sampler sold at the auction of Ronald’s household effects in Pennsylvania in November 2002.

The Stalters of Alberta, Canada, descend from John Stalter (1812-1897) and Jacob Stalter (1823-1898). Family tradition said, in the past, that these two family heads were not related. But we now know that both John (1812) and Jacob (1823) were descendants of Johannes Stalter (c.1690) from the Zweibrücken region of western Germany.

b. About Mary Birky (1862)
Mary, a high spirited young lady, became the wife of quiet and reserved John Schrock. As an adult she never weighed 100 pounds at any time in her life, but she was a bundle of dynamite in her personality (see photo IMH Vol. XXIX, No. 4, Winter 2002). In many ways Mary was a very artistic and talented person, and had either a potion or a poultice for every ailment her grandchildren had. Mary and John had two children, Albert and Fannie, and were actively involved with the families of both, since Albert died young and Fannie was a busy pastor’s wife and mother of five children.
Children:
1M: Albert, b. 1886 Morton, IL, d. 1917 Fisher, IL; m. Josephine Yordy
2F: Fannie, b. 1889 Morton, IL, d. 1950 Fisher, IL; m. Joseph Heiser

The descending lines of Barbara’s siblings, Andrew and Mary, came together in Albert Schrock and Josephine Yordy, whose son, Orval, is the father of Donna Birkey.

Andrew, (b.1780) married an Ackerman, lived at one time at Lutterbacherhof, near Oermingen and Saar-Union in Alsace, France. The farm is secluded in the countryside. At many times Mennonite families lived on this farm–sometimes many families at once when persecution was heavy, according to Hermann Guth. Andrew and his family left Strasburg in 1837, boarded a sailing ship, and were on the ocean 51 days. The food and water were nearly exhausted when they finally landed in New York. They went overland to Butler Co., OH, and stayed for a while, then by covered wagon to Germantown, Woodford Co., IL, where they settled.
Children:
1M: John, b. 1804 France, d. 1863 Illinois; m. Magdalena Roggy
2F: Barbara, b. 1805
3F: Catherine, b. 1807 France
4M: Andrew, b. 1809, d. 1881; m. Barbara Oyer
5M: Joseph, b. 1811
6F: Marie b. 1813